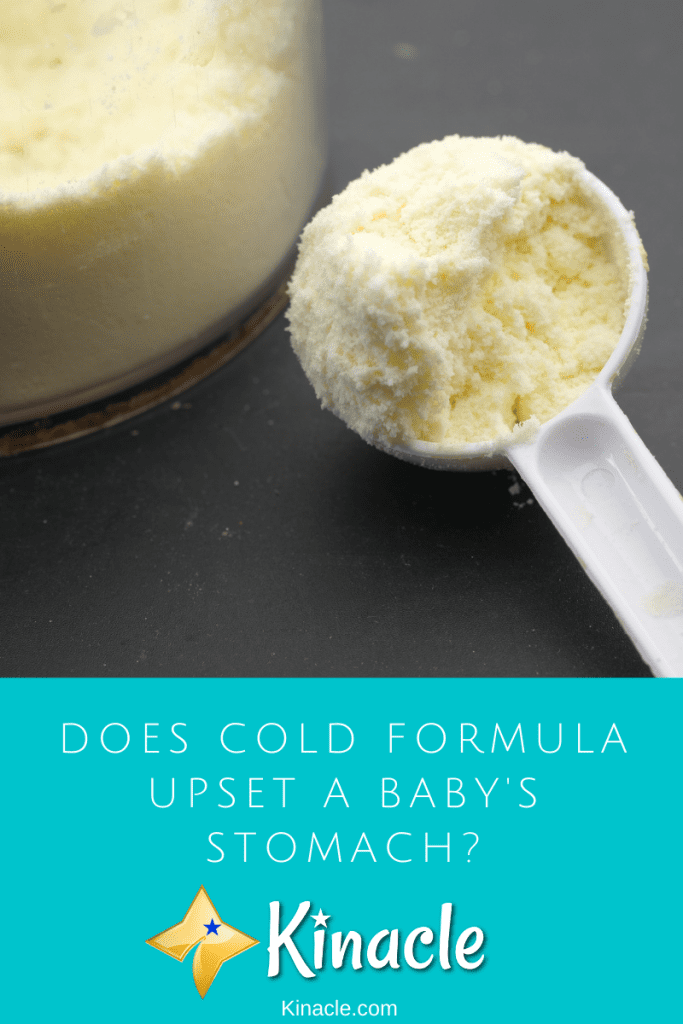 For new parents, every decision-making for their baby can be quite a challenging task, particularly for the things concerning their little one’s nutrition.

There’s a lot of debate when it comes to breastfeeding versus bottle-feeding, and here comes another set of questions once you choose to give formula milk to your baby. One of which you might have thought of is whether it would be okay to give formula to your baby when it’s cold. After all, warming up bottles for a middle-of-the-night feed can sometimes be more difficult than it sounds!

But now the more important question is, does cold formula upset your baby’s stomach? While there is no scientific evidence to prove that cold infant formula can cause stomach issues, many parents swear that it does help to warm the bottle a bit before offering it to their baby.

Since this evidence is anecdotal, we decided to do some research. Let’s look at the effects of giving cold formula to babies and whether it could help or otherwise make things worse for your baby’s tummy.

Here are some of the expert recommendations on giving formula milk to babies.

Unlike breast milk that is always fresh and readily available from the mom, formula milk needs careful preparation and handling to prevent the milk from being contaminated by some disease-causing bacteria. That’s the reason why the American Academy of Pediatrics (AAP) and the World Health Organization (WHO) issued some recommendations in preparing infant formula for bottle-feeding at home.

Both the AAP and WHO recommend using boiled water which is cooled down to no more than 30 minutes in preparing powdered infant formula. This is done to make sure that the water used is safe for infant consumption and does not contain any harmful microorganisms that can make your baby’s stomach upset.

The infant feeding bottle with hot formula can then be run through the tap or placed in a container filled with cold water to reduce the temperature before giving it to your baby. The temperature of the mixed formula milk can be checked by dropping some of the mixture on the inside of your wrist.

Take note that the formula milk should be offered to your baby lukewarm and not too hot. Hot formula can scald your baby’s skin and mouth, so be extra careful before offering a bottle to your baby.

Though using boiled water is the age-old method of preparing infant feeding bottles, modern times have created plenty of safe water options for babies. The AAP suggests that parents can simply use bottled water or tap water that is marked as safe by your state or local health department in mixing powdered formula. As such, you wouldn’t be required to heat the water to make sure it’s safe before giving it to your baby.

Sometimes, you would also need to prepare infant formula beforehand and store it in the fridge for later use. This is when issues with giving cold formula to infants arise.

According to the AAP, it is best to give warm infant formula to infants below 6 months of age because they still can’t regulate their body temperature efficiently. Additionally, some parents claim that their babies prefer warm formula. But in the end, not all babies are the same and some infants may prefer and tolerate cold formula very well.

Infants can safely drink cold formula as long as it is prepared and stored properly. The conditions that should be met to make sure that the infant formula is safe are the following:

So cold formula can be given to babies as long as it meets the safety considerations, great! But some parents have noticed that their babies experience certain issues when doing this. We’ve often heard parents tell us, “but wait, my baby seems to be gassy, will cold formula give baby gas?”

Does cold formula cause gas?

In contrary to the common belief, there are no found studies backing the claim that cold formula cause gas. If your baby seems to be extra gassy it may be due to causes other than the temperature of the formula you’re giving him.

Gas in babies is not a medical condition, but it do cause stomach discomfort and crying. Check out these common causes of gas in babies, as one might be the culprit:

Whether it is prepared warm or cold, the bottle of formula can cause bubbles that can be ingested by your baby if given immediately after shaking or mixing. It may help if you’d let the mixture settle for a minute or two to get rid of the bubbles before actually giving it to your baby.

Otherwise, you may talk to your pediatrician about switching to pre-mixed liquid formula and get rid of the mixing!

Hypersensitivity to soy or lactose

Some babies are born with hypersensitivity such that they can’t tolerate too much soy or lactose in their formula. A small study found that giving babies low-lactose formula can help ease gas and colic.

If you feel that giving baby cold formula often leads to gas, you may want to have your baby checked by your pediatrician. It may be that the formula itself needs to be changed to ease your little one’s stomach issues.

Swallowing too much air

Babies are just learning how to do everything- from feeding, talking to laughing. And so, in many cases, your happy baby may swallow too much air that he may also find it difficult to pass. This is a normal part of how his or her digestive tract develops as they grow up.

Some techniques like burping and tummy time can help your little one get rid of the excess gas that they’ve swallowed.

Some positions may also contribute to your baby getting in more gas when feeding. Give particular attention to the position of his feeding bottle.

If your little one is capable of holding his own bottle, make sure to check if the nipple is filled with milk as he swallows. Sometimes, babies may slightly tip off the bottle such that air can get through while he feeds. This can cause extra gas in his tummy!

Does cold formula cause constipation?

There is no evidence that cold formula can cause constipation, but if you feel that your baby is constipated, you can talk with your pediatrician for proper assessment.

In most cases, it would be hard to tell alone whether your baby is really constipated or not. Formula-fed infants usually pass out at least one stool a day, but many can go 2 to 3 days without stools and still aren’t constipated.

If your health care provider has established that your baby has constipation, then they would also recommend the proper ways on how to relieve it.

Does cold formula cause diarrhea?

The same way, there is no proof that cold formula can cause diarrhea. However, improper handling, preparation and storage of infant formula can lead to contamination of bacteria which then, can lead to unpleasant gastrointestinal symptoms like diarrhea.

Additionally, the AAP warns against watering down infant formula. This is when you add in more water in mixing infant formula than what the manufacturer has advised. Watered down formula can cause poor nutrition, imbalance of electrolytes and may cause seizures.

Does cold formula cause reflux?

Cold formula doesn’t cause reflux or the condition in which the contents of the stomach goes back up the throat and mouth.

Regardless if they are having baby formula cold or warm, reflux is pretty common in babies, especially those who are below 3 months of age. This is because infants have weak or underdeveloped gastroesophageal sphincter, the valve that makes sure that stomach contents won’t go back up after they are swallowed.

Reflux in babies will normally resolve on its own as they grow up, but while waiting, you may try out some acid reflux remedies at home.

Severe acid reflux which already disrupts your baby’s nutrition will need evaluation and treatment from your pediatrician. Sometimes, reflux can be caused by sensitivity to formula milk ingredients, such that shifting your baby’s milk to hydrolyzed protein or soy milk formulas might be advised.

Is warm formula easier to digest?

The body is naturally warm and as such, many parents are wondering, is warm formula easier for baby to digest?

You might have read that warm formula may be easier for the baby’s stomach to digest because the body doesn’t have to spend more energy warming it up to be absorbed. It does make sense, but again, researchers have yet to find evidences to prove this one either.

While warm formula may not have direct effects to baby’s digestion, it can help babies in a couple of ways:

Warming infant formula bottles does help with the temperature regulation of babies 6 months old and below. These babies can’t adapt to external temperature that effectively, so their bodies might take time to adjust when formula milk is given cold.

Transition from breast milk to formula

Warm formula may be tolerated well or preferred by some babies, especially the ones who have been transitioning from breastfeeding.

Breast milk is naturally warm, so if your baby was used to its temperature, chances are they will prefer their infant formula to be served warm as well. It’s more of a personal preference among breastfed babies than anything to do with digestion issues.

A group of infants that may find warm formula extra beneficial are those born prematurely. A 1995 study found that warming milk to body temperature promoted better tolerance among premature infants and may help the care providers in offering optimal nutrition to preemies.

So unless your baby is a preemie that is being closely monitored for his nutrition, you have the option of feeding newborn cold formula or warm formula. Both ways are fine and you wouldn’t need to worry that it may affect his digestion.

To round it up, cold formula doesn’t directly upset baby’s stomach or cause digestive issues like gas, constipation, diarrhea or reflux. Some babies may even prefer cold over warm formula, and it is perfectly fine as long as they gain enough weight and appear healthy.