Does Etsy Have Fake Reviews (And If So, How Do You Spot Them?) 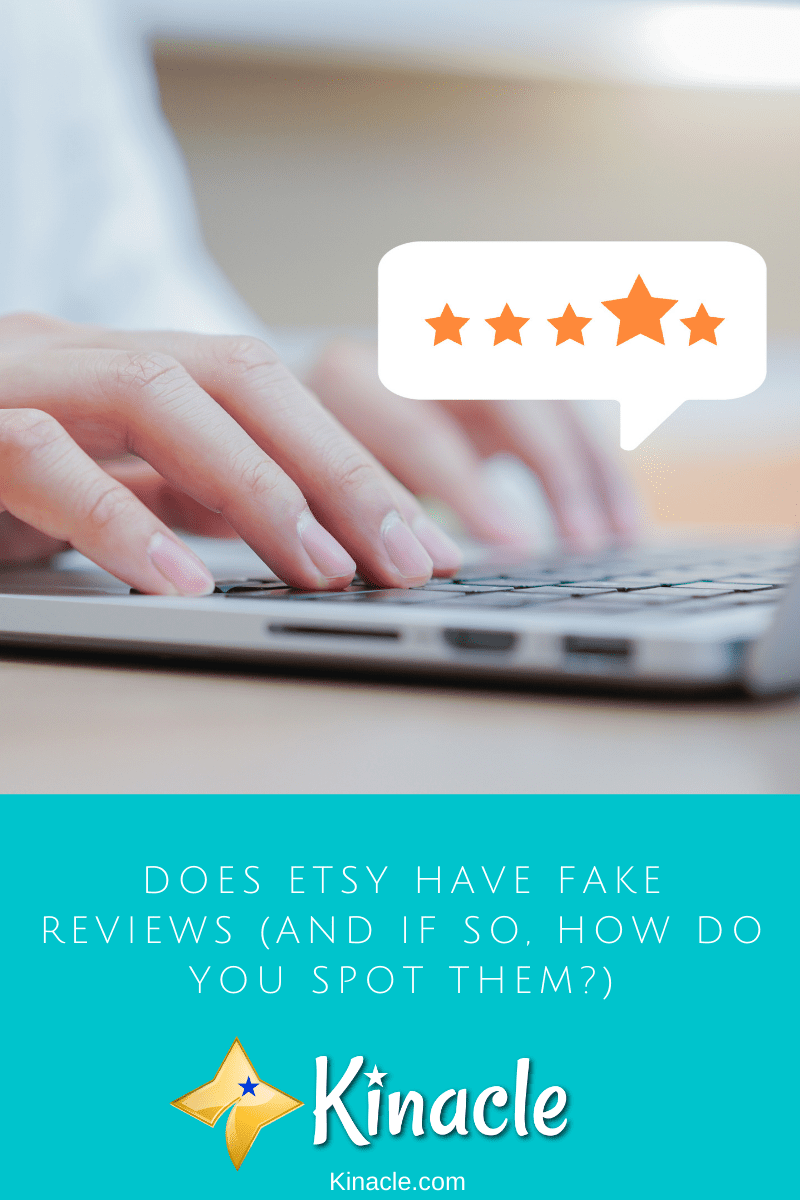 Amazon recently made news for banning hundreds of brands engaging in review fraud – a practice that is still extremely widespread and rarely talked about.

As trust in Amazon’s review system (and online reviews in general) begins to fade, it begs an important question:

Does the same hold true for Etsy? Does Etsy have fake reviews? And if so, how can we protect ourselves, both as buyers as well as sellers on the platform?

As someone that operates two Etsy shops myself, I decided to investigate.

Here are the facts – there are fake reviews on Etsy. This is undeniable. However, unlike on Amazon, you probably don’t experience fake reviews very frequently (which I’ll explain more later.)

Upon Googling ‘buy fake Etsy reviews’, I encountered the following result, which seems to be the top page to purchase these fake reviews: 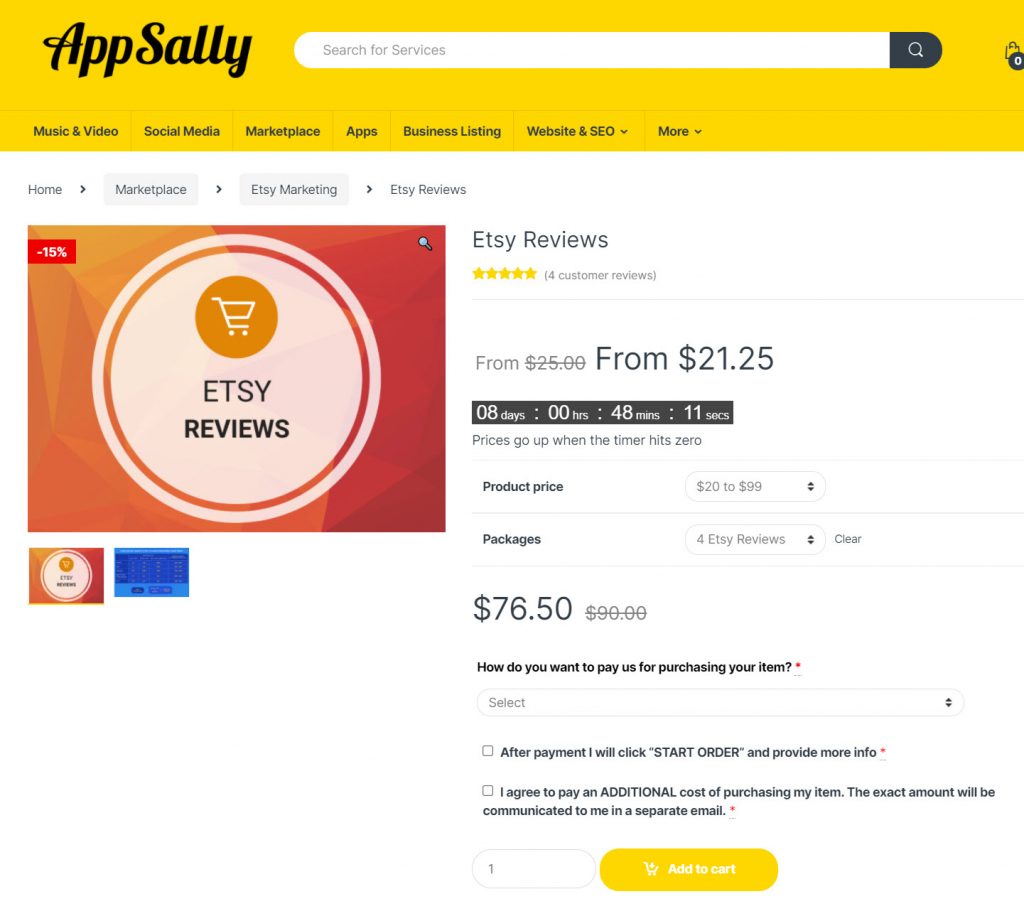 According to Ahrefs, this page alone receives an estimated 142 visits a month at the time of writing, or just under 5 visits a day.

It is unknown how frequently this service is actually purchased, although for what it’s worth, the service for fake reviews does have… 4 reviews

Keyword tools are not 100% accurate, but it can be estimated that searches for purchasing fake Etsy reviews pop up at least a few hundred times per month.

Additionally, forums like BlackHatWorld are filled with threads from people looking to buy fake reviews from others, with an average price around $10 per review. Here are a few examples:

It would seem that fake Etsy reviews are a serious business!

This obviously does not account for people that have friends or family purchase their product for the sake of a review – something that may be much more common (and Etsy is not equipped to stop.)

Some shoppers also bribe store owners for discounts in exchange for positive reviews, which are undoubtedly accepted by some new store owners.

How To Spot Fake Etsy Reviews

Spotting fake reviews typically comes down to a few things, and on Etsy they’re not much different:

Review farms tend to publish very generic reviews, that can apply to almost any product. For example, ‘my wife loves it’ or ‘very high quality.’ They are often short and fail to call out any specific details about the product.

You should be suspicious of any ‘John Smiths’ or profile pictures that look like they came from a stock photo website.

Fake reviews will generally come in all at once. If someone gets 5 reviews on the same day but then none for weeks, this may indicate that the reviews were purchased.

Poor Grasp On The English Language

Many fake reviews contain improper spelling or grammar, due to being outsourced to countries in which English is not the primary language. This is less prevalent on Etsy than on other marketplaces, but it’s still an issue.

Specifically on Etsy, some sellers may set up fake products for the sake of generating cheaper reviews. For example, creating a digital download and pricing it at $1 to avoid having to ship a product to the fake review farm. These will still show up as shop reviews, even if that product never actually existed.

If you’re interested in learning more about how sellers scam customers online, be sure to check out my Scam Avoidance Series below! For a fun exercise, see how many of these are being used by that fake review service above!

But Not As Bad As Amazon

While it’s clear that Etsy does suffer from rake reviews to some degree, this is not nearly as bad as what’s currently going on with Amazon.

This is due to the competitive nature of the platform.

Amazon is the world’s largest eCommerce website, by far. Ranking for top positions can mean tens of thousands or even hundreds of thousands of dollars per month in recurring revenue. Due to massive discrepancies in order volumes even among the top positions, companies fight hard to climb to that space and then maintain their position.

This has led to all sorts of blackhat, unfair tactics that extend far beyond fake reviews.

Still, it’s not uncommon these days to see brands offer compensation in exchange for five-star reviews, or bribes to remove any negative reviews left on their products.

These tactics are much more common among Chinese sellers, who can start new Amazon accounts much more easily than anyone located in the U.S could ever dream of, due to the way Amazon audits new accounts.

In fact, many are happy to knowingly break rules, get away with it as long as they can, accept that they will get banned, and then reappear a week later under a different name only to repeat the process.

Etsy as a whole has far fewer sellers that move any meaningful volume on the platform. The average Amazon seller makes $26,000 in profit in their first year, while the average Etsy store makes just over $6,000 in revenue.

And although the search volume is much lower, there is much less competition for most product classes on Etsy.

Taking this a step further, are the fact that reviews don’t have the same impact on Etsy as they do on Amazon.

Recent reviews play into Etsy’s search algorithm slightly, but are not the primary factor. Shoppers cannot even see product-level reviews for the products they’re looking at until after they click through to your listing – they only see the total reviews and average rating of your shop in its entirety.

This means that reviews do not have the same impact on conversion as they would on a website like Amazon.

Finally, Etsy shoppers shop differently than Amazon shoppers, and this is another important factor to consider.

On Amazon, shoppers often know what they have in mind, and they are just looking for the best product at the best price to solve their problem. On Etsy, there are much more ‘window shoppers’, browsing the site looking for something aesthetically pleasing, or perhaps purchasing gifts for themselves or loved ones. They focus on pictures first, and use reviews to feel comfortable in placing their purchase.

It is much easier to successfully sell customers on a product they’ve already emotionally invested themselves in, even without product-level reviews on your Etsy sales pages.

On Amazon, where so many products are made from the same factories and are essentially exact replicas of each other, customers rely on reviews more heavily to pick products worth considering. The nature of the two platforms is just too different for Etsy’s fake review problem to be at the same level of concern.

Etsy does suffer from fake reviews, but not on nearly the same scale as websites like Amazon do.

Keep in mind the tips provided above on how to spot fake Etsy reviews, and you’ll be able to shop with peace of mind on Etsy’s marketplace.

If you’re a seller, remember that fake reviews are against Etsy’s policies and can lead to an account suspension. The best way to receive natural reviews is simply to provide exceptional service, and ask for them from satisfied customers.