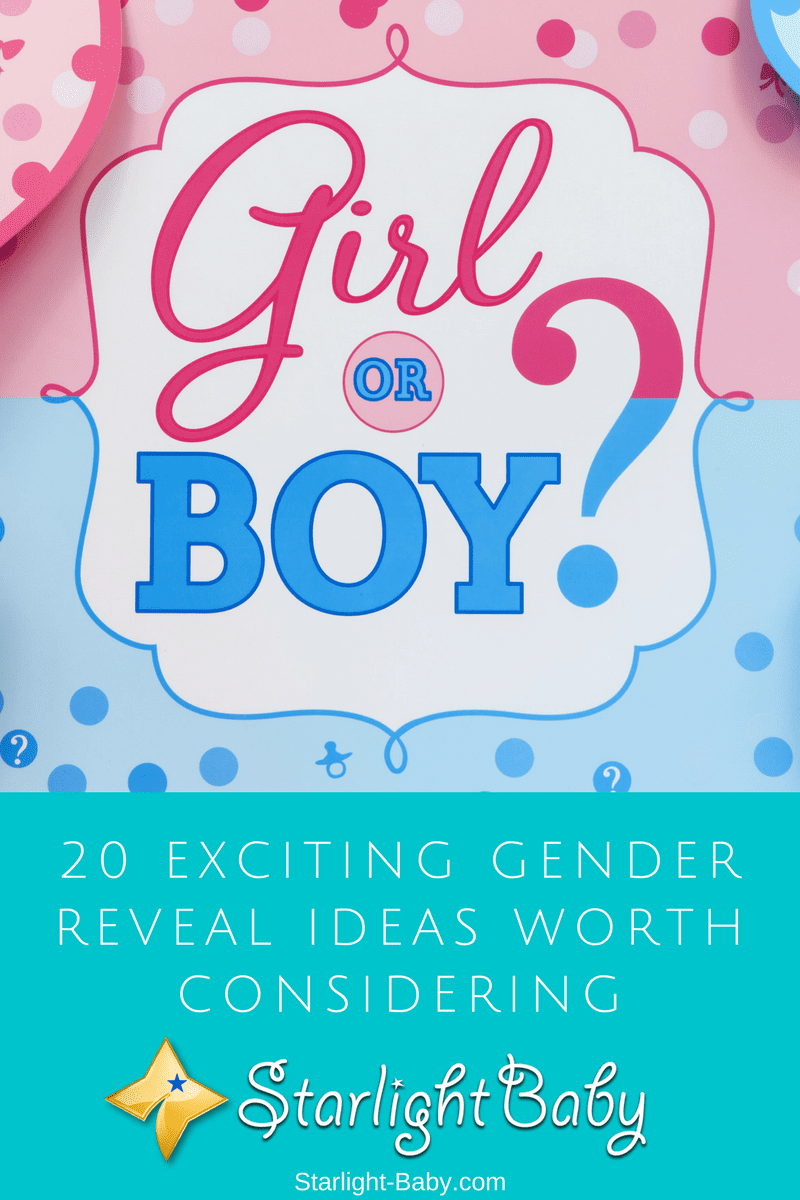 Are you looking for awesome gender reveal ideas? The way expectant parents reveal the gender of their baby has changed dramatically over the years. Now, rather than simply telling friends and family the sex, couples prefer a more memorable, unique reveal.

From wild and extravagant to sweet and simple, there’s sure to be a gender reveal method below to suit your budget and preferences. So, let’s take a look at just 20 awesome gender reveal ideas you can use to break the news to your loved ones.

This is a popular and adorable way to reveal baby’s gender. It can be done in numerous ways, starting with hosting a gender reveal party. When you’re ready to reveal the gender, simply cut open the cake and watch your guests gasp with joy!

You can either add food coloring to the cake or fill it with colored candy. That way, when you cut into it, either blue or pink will b revealed. If you’re pretty good at baking you could create the cake yourself, but it may be easier to hire someone to bake it for you.

3. The Painted Handprint On Bump Reveal

This one is adorable! Invest in a plain white t-shirt and then dip your partners hands in the appropriate colored paint relating to baby’s gender.

Take a photo with your partner standing behind you, with their hands on your stomach. Then get them to remove their hands and take a photo of the cute colored hand prints left behind. This is another great alternative idea to a gender reveal party and again is really affordable to do. Just be sure the paint cannot be seen on your partners hand during the first photo.

Another very unique idea and awesome for Harry potter fans – the sorting hat reveal! If you are a major fan of the Harry Potter films, you’ll be familiar with the sorting hat. Used to sort pupils into various houses, the sorting hat can make an awesome gender reveal prop.

You can either make your own or buy a ready-made sorting hat. Then, create a poster which reads something like “Only the sorting hat can see, boy or girl, what will it be?”. Gather your guests around and then lift up the hat to reveal a piece of baby’s clothing in either pink or blue.

Of course, you can use your own imagination and put whatever you like under the hat to make the reveal. It’s a super-cute and entertaining way of revealing the gender of baby.

If you want to make your gender reveal fun, why not use silly string? Invest in pink or blue silly string but keep the colors secret from your guests. This could mean you need to cover up the labels if they state what color is in them.

Once the color has been hidden, give your guests a can of silly spray and let them spray you and your partner with it. The color will reveal the gender. It’s an unusual idea but you’ll be surprised just how much fun you and your guests have with this one!

Another fun idea is to use a piñata to reveal your baby’s sex. Everyone loves hitting a piñata and you could even use it as a theme for your reveal party. Serve up tacos and virgin Mexican cocktails for a full-on fun theme.

You’ll need to fill it with pink or blue confetti, or you can buy a ready-made gender reveal piñata online. It’s a really fun yet affordable way to reveal whether you’re having a boy or girl.

If you want to really grab your guest’s attention, why not turn the reveal into a competition? Guests vote to say whether they think you’re having a boy or girl, then the ones who get it right can receive some sort of prize.

This is one of the easiest ideas to personalize. You can choose how your guests will guess the gender and what prize they receive for getting it right. For example, you could do a voting system where there’s ballot boxes to put gender voting slips in. Or, why not ask guests to vote by grabbing either blue or pink ribbons? Let your imagination run wild and see what gender competition reveal ideas you can come up with?

If you want a really unique gender reveal, why not invest in a Pokémon gender reveal ball? They’re surprisingly cheap and are ideal for gamers and those with a love of anime. Simply toss the ball and watch as it explodes to reveal pink or blue.

This idea is great for those looking to make more of a spectacle out of the reveal. It’s a fun, quirky idea that your guests won’t forget in a hurry!

If you want to take the fun level up a notch, why not opt for a paint gun reveal? If you and your guests are up for getting a little messy, a paint gun fight can be an awesome way to reveal baby’s gender. Simply fire up the paint guns and squirt your guests with either blue or pink colored paint.

Fancy trying something a little less active? A balloon reveal is an awesome way to expose baby’s gender. Again, there’s numerous ways you can do this.

You can simply fill a balloon with pink or blue confetti and pop it to reveal the result. Or, why not put as many pink or blue balloons you can fit into a large box and open it to reveal baby’s gender? You and your guests will have an amazing time watching the balloons float up into the sky.

Another super-fun way to reveal baby’s gender is with confetti! You can tailor this idea to fit your own preferences, but the simplest way to do it is to invest in confetti cannons. Fill them with the right colored confetti and then shoot them into the air for a dramatic reveal.

Alternatively, you can invest in small confetti poppers, which your guests can use to shower you with the right colored confetti.

It’s likely not all of your guests will be able to make it to your baby gender reveal party, or you may not be throwing one. If you want to reveal your baby’s sex to friends and relatives who can’t be there, why not send them a gender reveal package?

There are so many ways you can do this. You could keep it simple and stick a card in the package revealing “It’s a girl/boy!”. Or, you could get really creative and send them an egg reveal package. You can buy the fake eggs online and when you crack into them, the gender is revealed. Imagine the look on your friends and family’s faces when they receive this unique package!

A creative gender reveal idea is a scratch-off card. Much like a scratch card where you win money, the card will reveal whether your baby is a girl or boy. These can again be bought online and they’re a simple, affordable and fun way to reveal baby’s gender.

What better way to reveal baby’s sex than with the age-old “bun in the oven” pun? Bake up a batch of cupcakes and use either pink or blue coloring to decorate them. Then, when the time is right, simply pull the buns out of the oven to reveal baby’s sex.

Not only is this a creative way to reveal your baby’s gender, but your guests will also love eating the cupcakes too.

Want a fun and inventive way to reveal baby’s sex? Pop the Belly is an awesome game your guests will love to play! You’ll need some balloons, paint and something like a wooden board to stick the balloons on. You can actually buy specialized gender reveal boards for this exact purpose if you’d prefer.

The guests job is to take it in turns to pop a balloon. All of the balloons except one, will feature white paint. The final balloon will contain the color of your baby’s sex. Hide the balloon anywhere on the board and see how quickly your guests find it.

If you want to keep your gender reveal simplistic, a filtered ultrasound reveal is perfect. You’ll need copies of your ultrasound, then all you need to do is use something like Photoshop to edit it. Add a blue or pink tint to the ultrasound to reveal your baby’s sex.

Fancy keeping your guests guessing for a while? A gender reveal quiz can be really fun to play. It’s based on old wife’s tales, such as if you have salty cravings it’s a boy, while sweet cravings mean it’s a girl. Of course, these old wife’s tales aren’t necessarily accurate, but it’s a fun way to see if they are with your pregnancy.

This will also encourage guests to get to know you better, asking the questions they don’t know the answer to. At the end of the quiz, you can reveal your baby’s gender and see if the old wife’s tales are true.

This simple yet very messy idea is an awesome way to reveal baby’s gender. You can buy powder bombs online and all you need to do is set them off above you. It’s a good idea to warn your guests in advance to wear plain white t-shirts. The color of the powder bomb will reveal the gender.

If you’ve kept baby’s gender a secret even from yourself, you can let your partner surprise you with the gender reveal. Get them to write down the sex of the baby and place the answer into a sealed envelope. You can then open the envelope at the reveal party.

The great thing about this idea is, you’ll be just as surprised as the guests are!

If you’ve got pets, it’s a great idea to get them in on the reveal. Did you know for example, you can buy doggy t-shirts which say something along the lines of “Will it be a girl or boy? Tickle my tummy to find out”. Then, on your dog’s tummy, the answer will be revealed.

Your dog will especially love this idea! Though obviously you’ll want to ensure they naturally love attention!

So, there you have it, 20 awesome gender reveal ideas. There’s so many more, but the above are some of the most popular options available. You really can be as creative as you want to be when revealing the gender of your baby these days. How did you reveal your baby’s gender? We’d love to know below…