When Can Babies Eat Cheerios? 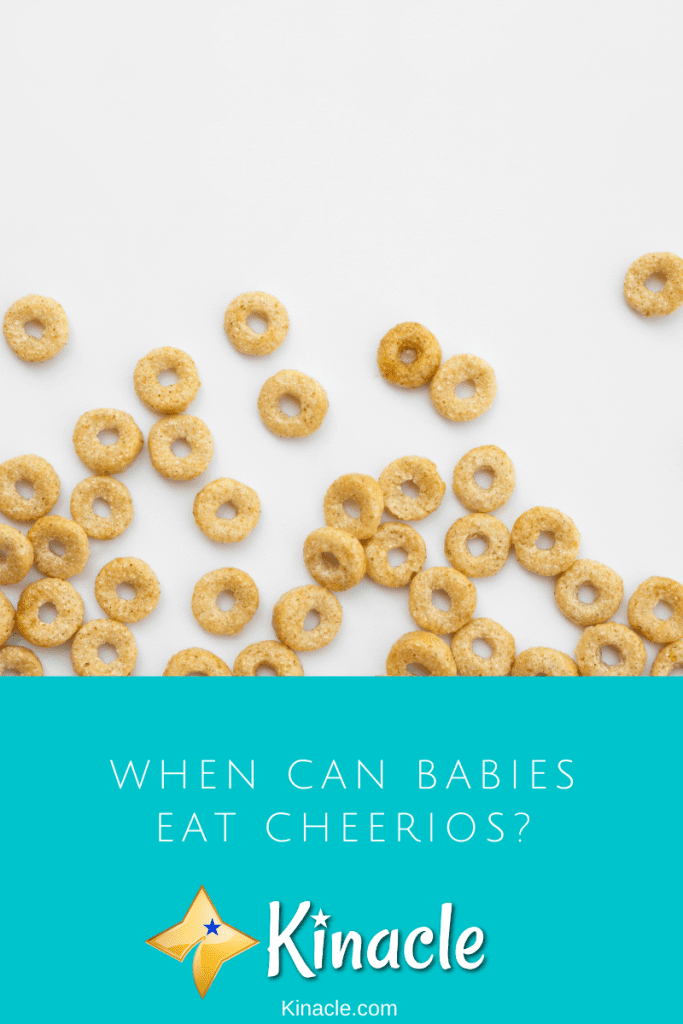 Nothing beats the feeling of seeing your baby healthy, and enjoying the meals that you’ve dedicated so much time and effort to prepare. But let’s face it, there are times that you may need to shift to some ready-to-eat foods, and Cheerios might be among the first food items to cross your mind. With that, you might also be thinking, when can babies eat Cheerios?

According to their official website, babies are usually ready to eat foods like the original Cheerios by 9 months of age. By this time, most babies have mastered the art of chewing, have developed their pincer grasp, and can sit on their own without support.

So, does that mean you have to wait until they’re strictly 9 months or older, or are there situations where they can eat them earlier?

If you’re also curious, let’s take this to the next level and see what experts have to say about when to introduce Cheerios to your baby. Before we get into that though, have you ever wondered what’s inside these o-shaped puff snacks?

The original Cheerios features 16 grams of whole grain oats, fortified with 12 vitamins and minerals, along with one gram of sugar per serving. Apart from what is featured, this type of Cheerios also contains other ingredients that are listed on its product label.

A serving of Cheerios gives 16 grams of 100 percent whole grain oats, which is around 2/3 of the recommended daily intake for toddlers below four years of age.

Whole foods from plants, like oats, are good sources of complex carbohydrates, vitamins and minerals. This type of food can help children feel full for a longer time. The consumption of whole grains early in childhood may also help reduce the risk of being overweight and obese later in life.

Additionally, the American Academy of Pediatrics (AAP) issued a recommendation to offer a variety of grains to babies to help lower down the amount of arsenic in their diet. Rice is found to have high amounts of arsenic. That is why apart from giving rice cereals, the AAP suggests that parents should incorporate other whole grains in a baby’s diet, like oats and barley.

According to the product label, the original Cheerios has Vitamin A, Vitamins B6, B9, and B12, Vitamin C, Vitamin D, calcium, phosphorus, magnesium, iron and zinc.

These vitamins and minerals help support healthy growth for children at a young age. In fact, the AAP recommends giving babies cereals that are fortified with iron and zinc.

Added sugar has been part of many pre-packed and processed foods, and like the rest, Cheerios has its fair share of artificial sweetener.

Though 1 gram of sugar may appear to be negligible for many, it is important to take note that the AAP is against giving food and drinks with added sugars to children under 2 years of age. Giving added sugars early in life has been linked to obesity and other health problems.

Tripotassium phosphate is a food additive that acts as emulsifier, acidity regulator and stabilizer in many processed foods. Though the amount used in making Cheerios is unknown, it is worthy to take note that too much consumption of artificial phosphates has been linked to kidney problems later in life. That’s something to consider when giving food to children at a young age.

Take note that the ingredients mentioned above refers only to that of the original Cheerios that comes in a yellow box. Many of their varieties are already mixed with artificial flavors and other ingredients that are not recommended for babies- such as honey.

Honey, including that of honey-flavored cereals and crackers, may cause a serious condition called botulism in babies below 12 months of age.

Cheerios for babies as their first food- Is it okay?

According to the AAP, parents can start introducing foods other than breast milk or formula to babies by 6 months of age. Solid foods can gradually be given to babies once they show the following signs of readiness:

So some of you might think, “My baby seems to be ready for solid foods, is it ok for my baby to start eating Cheerios right away?”

Truthfully, Cheerios might not be the ideal first solid food for babies. Here’s why.

The AAP recommends to keep the following reminders in mind when giving babies their first food:

The baby food must be soft or pureed

Soft/ pureed foods minimizes the risk of choking. Remember, your baby is used to eating breast milk or formula milk which are both liquids. It will take some time before your little one get used to moving solid foods down his throat.

Cheerios might be puffed, but it may take some time before your baby learns how to chew and dissolve them in his mouth.

Single-ingredient foods should be introduced first

Sad to say, the original Cheerios still doesn’t qualify for this category.

When introducing solid foods, it is recommended to give single-ingredient new foods every 3 to 5 days to check for food allergies. This will also help you withhold the specific foods which your baby has unusual reactions right away.

It is best to offer baby foods with iron and zinc

These minerals are needed for your baby’s optimum development, that’s why experts recommend giving foods that naturally have iron and zinc to babies. This includes baby food made out of meat and iron-fortified baby cereals.

Premade infant cereals often comes dry in a container. You may use water to dilute the cereal or use breast milk or formula milk to make the taste more attractive to your little one.

As you can see, Cheerios may not be the perfect first food. However, it doesn’t mean that your baby can’t taste their “O-some” goodness. Cheerios belongs to finger foods, just like wafer-type cookies, crackers and thinly sliced banana, which your baby can enjoy real soon.

So now the question is, when can babies start eating Cheerios?

When can babies have Cheerios?

The AAP suggests that finger foods, like Cheerios, can be given to babies once they can sit without support and bring his hands or other objects into his mouth. These developmental skills are usually achieved by 9 months of age.

Likewise, the manufacturer recommends to wait until your baby learns how to effectively chew food before offering their puff snacks to your baby. This will not just help your little one enjoy eating their snacks, but can also minimize the risk of choking while munching on these little puffs, especially if you are planning to give dry Cheerios.

With that said, it may be best to wait until your baby is fully ready to enjoy foods like Cheerios before giving them one. Be keen in observing their developmental cues rather than their age because some babies may develop a bit faster or later than others.

So generally, the original Cheerios can be given to babies once they mastered how to chew food, sit on their own, as well as put finger foods into their mouth. Due to their make-up, Cheerios may not be an ideal first food to be given to babies who have just transitioned from breast milk or formula to solid foods. Still, anything that concerns your baby’s nutrition can be discussed with your pediatrician.