Bleeding During Pregnancy – Should You Be Worried? 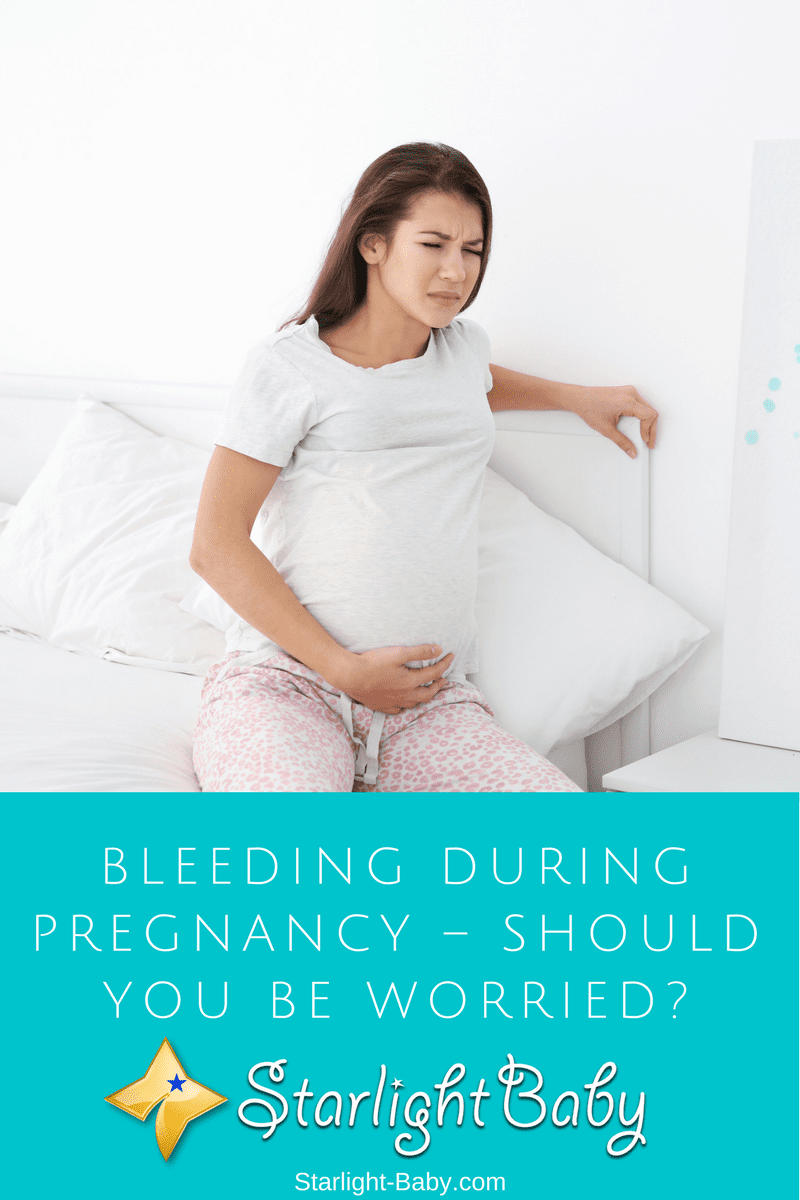 When you’re pregnant, spotting and bleeding can understandably be terrifying. The only times you’re really educated about bleeding during pregnancy is on television, and it’s usually presented as a really bad sign.

The truth is, bleeding or spotting during pregnancy is surprisingly common. While most of the time it isn’t actually anything to be concerned about, there is a possibility it could be a sign that something’s wrong.

Here, you’ll discover everything you need to know about bleeding or spotting when you’re expecting. However, it’s worth pointing out the information below should be used as a general guide and any bleeding should be checked out by a doctor just to be on the safe side.

Bleeding Or Spotting In The First Trimester

Many women don’t realize that bleeding or spotting throughout the first trimester is pretty common. However, if it occurs during the first 12 weeks, it could be a sign that something is seriously wrong.

The three main issues linked to first trimester bleeding include:

Miscarriage is obviously the most worrying issue. However, it’s worth remembering that if baby’s heartbeat has been detected on an ultrasound prior to the bleeding, it’s highly unlikely you’ll miscarry. It’s estimated approximately 90% of women who do experience first trimester bleeding after a heartbeat has been detected, will go on to have a healthy pregnancy. If it is associated with a miscarriage, you’ll also experience strong lower abdominal cramps.

The other issue linked to first trimester bleeding is implantation. This is the most common cause and it presents more as spotting, rather than bleeding. It occurs as the egg implants itself into the uterus lining. It should only last up to a maximum of a few days and the bleeding with be extremely light.

Although there is a chance bleeding early in the pregnancy could link to one of the three conditions above, the American Pregnancy Association also states the following as potential causes:

So, while bleeding during the first trimester is worrying, it may not be as serious as you think. It’s really important to seek advice from your doctor if you do notice any bleeding just to be sure the pregnancy is progressing as it should.

Bleeding Or Spotting During The Second And Third Trimester

Most commonly, later stage bleeding can be linked to issues with the placenta. It could be you are experiencing Placenta Previa; a condition which is caused by the placenta sitting too low within the uterus, causing it to completely or partially cover the birth canal opening. If the Placenta Previa is bleeding, it should be treated as an emergency and treatment should be sought immediately. However, it’s worth pointing out that this condition is extremely rare and affects approximately 1 in every 200 pregnancies.

Another cause of late stage bleeding could be placenta abruption. This occurs when the placenta completely detaches itself from the uterus wall either prior to, or during labor. It’s actually pretty serious and can be dangerous for both baby and you. However, like Placenta Previa, this condition is very rare and is said to only occur in approximately 1% of pregnancies.

If you’ve previously had a C-Section, bleeding during the second or third trimester could also be linked to a Uterine rupture. Again, this is very rare, but the scar from the C-section could open up. Emergency surgery would be required as it is a potentially life-threatening issue. As well as bleeding, you’ll also likely experience tenderness and pain within the abdomen.

Other, potentially less serious causes of second and third trimester bleeding can include:

So, while bleeding during any stage of pregnancy can be potentially serious, the majority of the time it is completely natural. However, it is best to be safe and seek advice from a doctor if you do experience any bleeding, no matter how minor. It’s also a good idea to wear a sanitary towel prior to visiting the doctor so they can see how much bleeding there is.

There is a possibility you may need to stay in hospital for observation, but this will depend upon the severity of the bleeding and what stage of the pregnancy you’re at. An ultrasound will likely be used to discover the cause of the bleeding and to check on baby’s health.

Overall, bleeding during pregnancy is worrying, but the best thing you can do is visit the doctor and remember that in most cases, it isn’t anything to be concerned about.