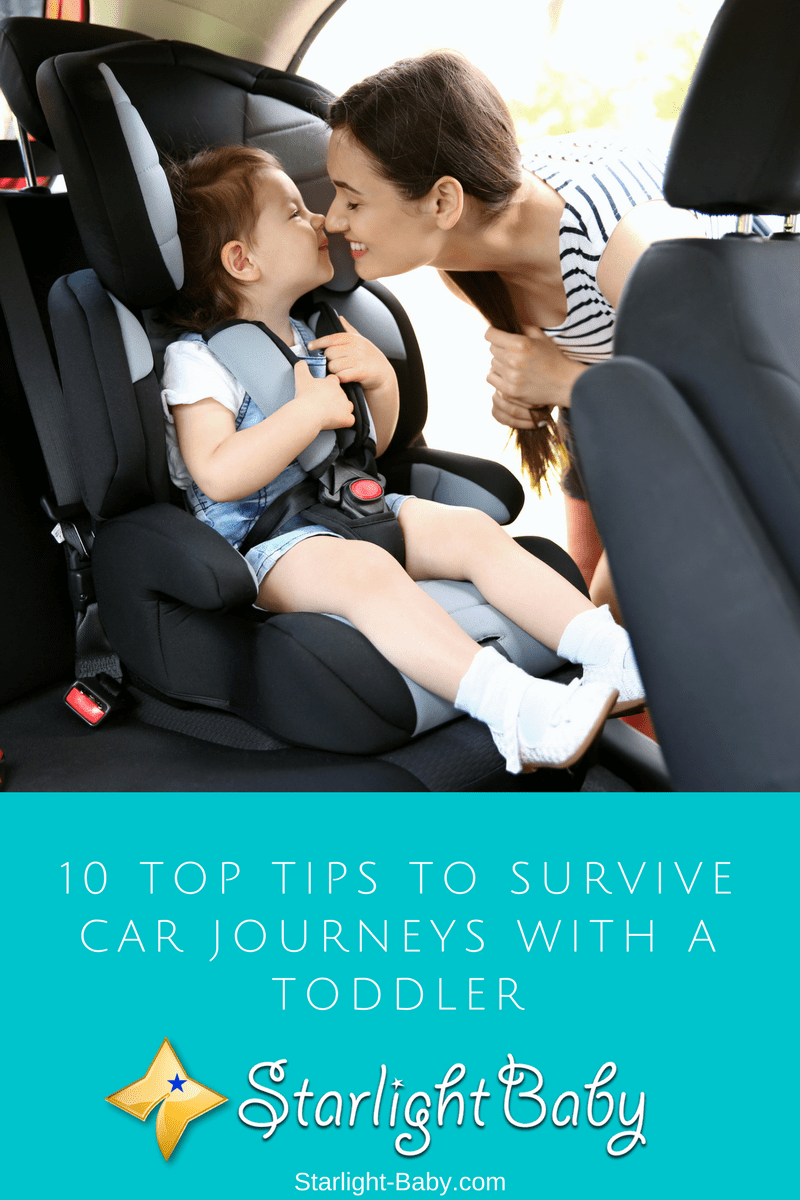 For most parents, the thought of spending long periods of time in a car with their toddler is an absolute nightmare. While there’s no denying it can be a very daunting and stressful experience, with a little preparation it’s totally possible to survive and maintain your sanity.

Here, you’ll discover some top tips to survive car journeys with a toddler.

1. Get A Good Night’s Sleep

Sleep deprivation can contribute to stress, and of course it’s not exactly safe to drive when you’re tired! So, if you can get a good night’s sleep, it will reduce the number of breaks you need to take along the way and help to keep you feeling that little bit calmer.

2. Try Not To Overpack The Car

When you’re going on a long journey, packing a ridiculous amount of stuff is sadly unavoidable. Even heading out to the grocery store can feel like you’re off on a military mission with the amount of stuff you need to take with you. However, while you are going to have a lot of stuff with you, you’ll want to avoid putting stuff into the backseat area of the car.

You can get away with putting your toddler’s backpack in the backseat area, but anything else will just clutter up the space. Trying to find things while you’re driving to calm a grumpy or hyper toddler can be extremely stressful. So, keep the backseat clutter-free and you’ll be surprised how much of a difference it will make to the journey.

3. Plan The Journey In Advance

Out of all of the tips featured on the list, this one is definitely one of the most important. It’s a good idea to plan out the entire route. Figure out where and when you can have breaks and always have a back-up route planned.

Anything can happen on the road. You could be held up by an accident for example. Without a backup plan, you’d have to go through the stress of figuring out where to go next, as well as your toddler demanding to know where you’re going, why you’re turning around and additional moaning about when you’re going to get there. Nope, it’s much easier all around to know exactly where you’re going and what to do if something unexpected happens along the way.

4. Avoid Taking Too Many Breaks

Breaks are essential when you’re going on a long journey but try not to have too many. No only do they lengthen the car journey, but they can also be pretty stressful. Your toddler may decide they don’t want to get back into the car as they’re bored of it now. So, there’s the potential for a full-blown tantrum.

Try to get to wherever you need to go as quickly, but also as safely as possible. Plan for lavatory stops and remember to take breaks in accordance with road safety guidelines.

This may sound like a pretty bad idea, after all, who wants to travel at night when you could be relaxing? Well, travelling at night is actually much less stressful than travelling during the day. For one thing, your toddler will likely sleep for most of the way. There’s also much less traffic on the roads at night so you won’t need to worry about delays.

You also won’t need to worry about meals either. So, you’ll get to wherever you need to be much quicker driving at night than you would during the day.

Regardless of what time you plan on driving, it’s important to make sure you take plenty of snacks. These will prove invaluable for both you and your toddler. Try to make sure they’re healthy snacks as otherwise you’ll end up with a hyperactive toddler and you’ll both end up feeling grumpy when the sugar rush wears off!

Food can also be a great boredom buster for kids. Now obviously, that doesn’t mean you should just keep feeding them. However, on a long road trip snacks aren’t just useful, they’re essential to keep energy levels up and to help you keep hold of your sanity!

7. Have Lots Of Car Games Planned

One of the key things that’s going to make your journey so much easier is making it fun for your toddler. Before you leave, have a list of games and activities that will keep your little one entertained.

Car games such as “I-Spy”, or the name game, can really help to pass a lot of time and make it a little more fun for everyone. As well as in-car games, you can also take your toddler’s favorite toys and even a tablet or kid-friendly smartphone. Digital entertainment is awesome and can really keep your little one quiet for hours. Obviously too much screen time is bad for toddlers, but just as a small distraction on a long car journey it’s perfectly fine to give in and let them watch a movie or cartoons.

8. Don’t Start The Games Until Your Journey Is Well Underway

One mistake you’ll undoubtedly regret is playing all of your planned games early in the journey. The trouble is, if you’ve got a particularly long journey, you’re going to get really stressed out if your toddler gets bored of all of their games early on. So, spread them out a little.

Play a game shortly after setting off, then simply chat to your toddler for a while. Let them take in the scenery going by. This also teaches them that being bored for a while isn’t such a bad thing. If you’re continuously providing some form of entertainment, your child will grow up to constantly need entertainment. You’ll notice they’ll start to make up their own entertainment, which is great for their little imaginations.

9. Split Up The Driving Duties If Possible

If you’re travelling with a partner, it really helps to split up your driving responsibilities. This can actually limit the amount of breaks you need to take too. You’ll also find it really useful for one adult to keep your toddler occupied while the other focuses on driving.

10. Always Have A Backup Plan

We’ve talked about having a back-up plan in your route just in case something happens, but it’s a good idea to have a backup plan for everything. Has your toddler got a toy or something you usually don’t like them to play with? If so, you could bring that out just in case nothing else works to settle them down.

The more you plan, the easier you’ll find the road trip to be. The above tips are guaranteed to soothe a cranky toddler and in some cases, prevent them from becoming cranky in the first place! Do you have any additional tips for surviving long car journeys with a toddler? Let us know below…