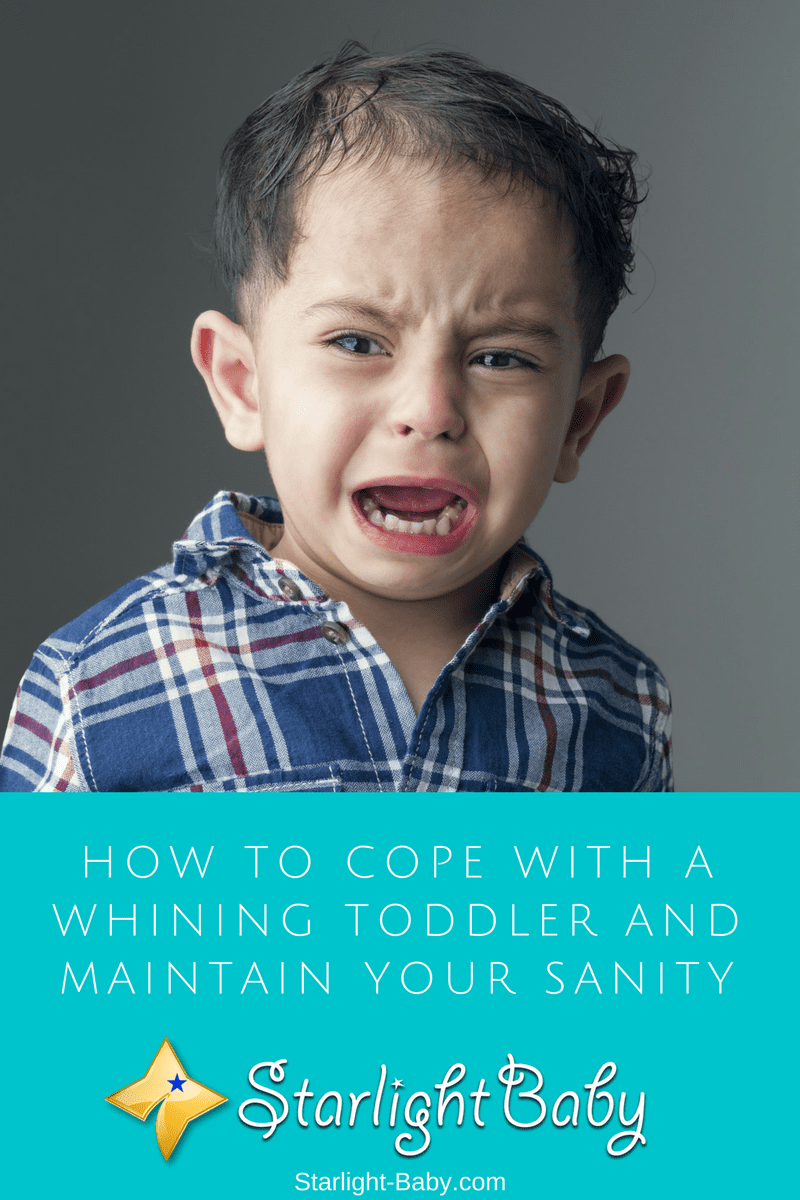 Is your toddler’s whining driving you to the brink of sanity?

As much as you love them, there’s no denying raising a toddler can feel like a constant uphill battle. Just as you combat one challenge, there’s always another one which crops up to take its place. Whining can develop anytime from the age of two and last up until they’re six years old. So, it’s unsurprising many parents are often pushed to the edge.

The good news is, although you’re unlikely to stop your toddler from whining, there are ways you can cope a little better. Here, you’ll discover how to cope with a whining toddler and maintain your sanity.

Understanding Why It Happens

Many parents mistakenly believe their toddler is whining because they’re spoilt. However, this couldn’t be further from the truth. Granted, if you’ve given your toddler everything they want and never really declined any of their requests, they could be a little bit spoilt. However, in general, whining is a classic and common trait all children develop at some stage.

It’s similar to crying in the fact toddlers learn to use it to get or to express what they want. You’ll typically notice the whining occurs due to your toddler being tired, hungry, sick, bored or if they’re simply craving attention. It’s totally normal, but how you react to it will determine how much and how long your toddler whines for. So, how exactly should you handle it?

How To Deal With It

If you’re tired of your toddlers whining behavior, there are some successful methods you can try out. Below, you’ll discover the best tips and advice to follow.

Remain Calm – This is easier said than done if your toddler’s whining is excessive. However, losing your cool will only escalate the whining. In fact, shouting at your toddler to stop whining is likely to lead to a full-blown tantrum. So, as difficult as it is, try to always remain calm.

You can use techniques such as closing your eyes, taking deep breaths and counting to 5, or even 10 if you need to! As simple as it sounds, this technique works wonders. You can take yourself out of the room if you feel unable to calm the mind with your toddler whining next to you.

Just remember, the calmer you are, the easier it will be to eliminate the whining.

Keep Your Responses Consistent – In order to put a stop to your toddlers whining, it’s also important to ensure you’re responding consistently. This means, using the same response each time.

Think about it, if you sometimes give in to whatever your toddler is whining for, but then others you don’t, it’s going to send mixed signals. So, however you choose to handle the whining, make sure you’re willing to stick to it.

Consider Videotaping Them – This is one of the more unusual tips and it may sound a little crazy, but it can work. Videotaping your toddler while they are whining and then playing it back to them can really help to teach them what whining is.

Contrary to what you may believe, toddlers don’t necessarily know they are whining. So, being able to show them how they sound while they whine and how they sound normally, can help you to let them know what is expected of them.

Now, it’s important to only play back the videotape when your toddler is in a good mood. Trying to show them while they’re actually whining isn’t going to help. This is because they’re already in a heightened state of frustration or upset so they’re unlikely to listen to reason.

When they are in a good mood, play back the video of them whining and then the video of them asking for something normally. Point out the differences between the tone of voice and explain that the whiny voice can hurt people’s ears, so they don’t listen to it. You could even try adding that it doesn’t make them sound like a big boy or girl, which is why they’re sometimes ignored. You’ll be surprised how much of an influence this can have over their whiny behavior.

Try A Little Humor – Sometimes, humor is the best way to deal with consistent whining. It diffuses the situation, makes you feel calmer and can eliminate the whining completely.

The next time your toddler whines at you, say in a shocked light-hearted voice “Where’s that whining coming from? Can you help me look for it?” Then pretend to look behind the TV, under the sofa and anywhere else you can think of. Encourage them to help you look too. Chances are, this will result in lots of giggles and miraculously – no whining!

If this doesn’t work, you can also try to offer fix your little one’s whining with “tickle oil”. This basically involves you tickling your toddler until they stop whining. Of course, this can backfire a little as they may start to whine in order to get tickled. However, at least if the whining is done to get tickles, it won’t last that long.

It’s important to remember here that adding humor to the situation won’t necessarily help. Some toddlers hate to be teased so if yours is one of them, don’t attempt these techniques.

Change The Topic – The distraction technique can also prove effective and would be an ideal alternative for toddlers who don’t enjoy being teased. You simply change the topic to something more enticing if reasoning isn’t working.

So, say your toddler is whining to have another toy while you’re out shopping. If you’ve told them many times that they already have lots of toys, but it’s not working, change the topic. Remind them of something fun they have coming up such as a play date or a visit to the zoo. This is usually enough to get them talking about whatever it is they’re excited about.

You can also try to distract them with a hug. This can help to brighten up their mood and in turn, stop the whining.

Praise Them Whenever They Use Their Normal Voice – Often, your toddler may be whining because you don’t tend to respond to them when they use their normal voice. So, if you notice your toddler asks you for something without whining, be sure to heap a lot of praise onto them.

Make Sure They’re Receiving Enough Attention – Similar to the above tip, it’s important to make sure you’re giving your toddler enough attention. Although it’s not always the case, whining can be your toddler’s way of trying to get your attention.

Try spending more time with them doing something fun together. Reading stories, playing imaginary games and just spending time together is a great stress reliever for you too. Sometimes it’s easy to forget to enjoy this time with your toddler. They grow so fast and before you know it you’ll be wishing they were this age again (no really, you will!).

Don’t Give In – Finally, the key to stopping your toddler’s whining is to never give in. This is going to be pretty tough sometimes, especially if they’ve been whining non-stop all morning. However, if you give in, you teach them that whining does get what they want.

Instead, only give them what they want if they ask in a normal voice. It may take a while, but they’ll start to realize that whining doesn’t get them anywhere.

These are some of the best ways to cope with a whining toddler without losing your sanity. Some days, nothing may work, and you may just need to ride it out. However, if you follow the advice above, you should be at least able to minimize the whining to a bearable level.

Have you got your own tips which have worked to stop your toddler whining? Let us know below…