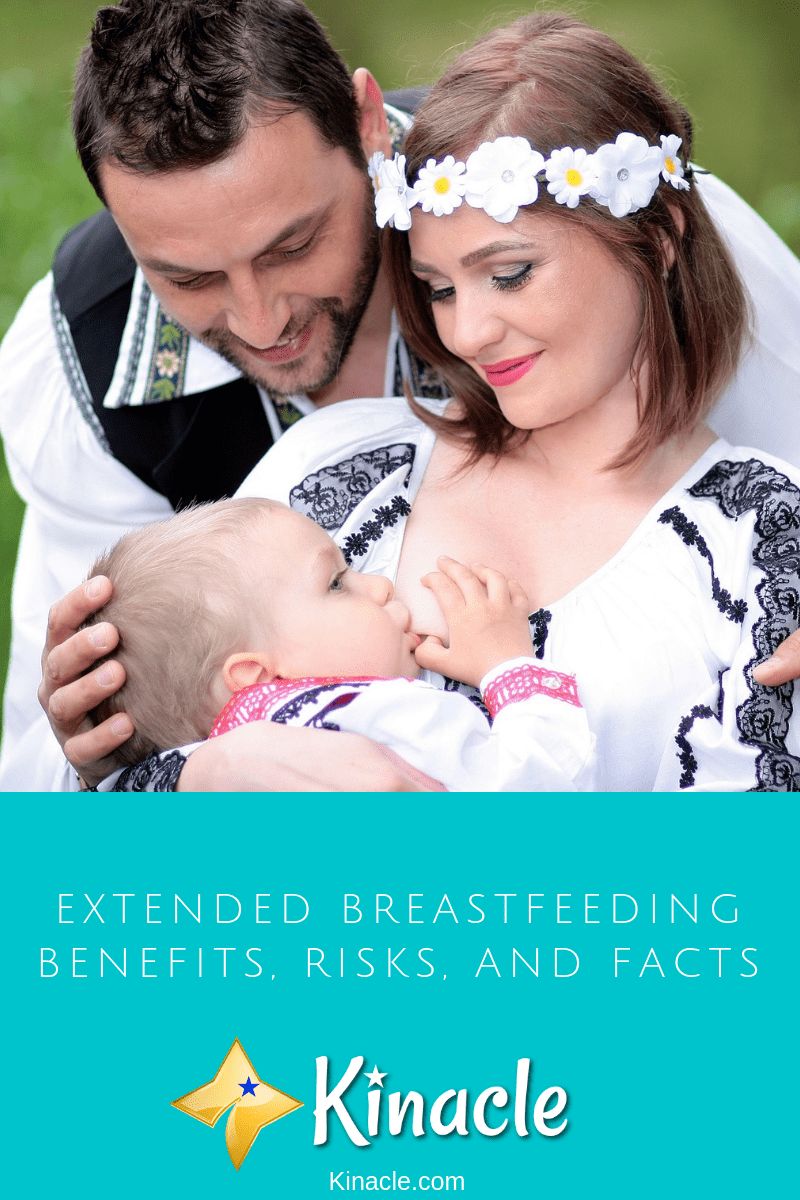 So, what exactly is extended breastfeeding and is it something you should seriously consider? Here, you’ll discover everything you need to know in order for you to make the right decision for you.

What Is Extended Breastfeeding?

Extended, or long-term breastfeeding, is where you choose to continue breastfeeding after your child turns one year old. It’s actually not all that unusual, with many moms choosing to breastfeed until their child is between two and four years old.

According to the World Health Organization, it is recommended you breastfeed for two years. However, there is somewhat of a stigma associated with extended breastfeeding. This means some moms stop breastfeeding sooner than they’d actually like to.

What Are The Benefits?

There’s a lot of potential benefits which come from breastfeeding a toddler. Your milk provides growth hormones, enzymes, vitamins and immunities.

Studies have actually shown that children who are breastfed for longer, are sick a lot less often than those who aren’t. There’s also the fact that if your child does get sick, breastmilk may be the only thing they’re able to keep down. So, it can both prevent illness as well as speed up your little one’s recovery if they do get sick.

It’s not just your child’s health which can improve through extended breastfeeding. Your health could also improve. Research has shown that compared to women who didn’t breastfeed, women who nurse their children have lower rates of cardiovascular disease, high blood pressure and Diabetes.

Another benefit is the bond that continues to develop between you and your child. During the toddler stage, they become a lot more independent. However, if you’re still breastfeeding, you’ll still be able to maintain a close emotional bond with your child. Some think this would make the child needier. However, it actually has the opposite effect. Children who are breastfed for longer tend to develop more independence than those who aren’t.

Breastfeeding a toddler can also help them to settle when you travel to new places. It’s a comfort which can really help to calm them down in new environments and encourage them to sleep.

Are There Any Downsides?

Although there’s a lot of compelling benefits of extended breastfeeding, like everything, there are some downsides. These include:

The criticism and negative comments you potentially face is definitely the biggest downside of extended breastfeeding. It’s also why many moms choose not to extend it. If you breastfeed your toddler in public, you can guarantee you’re going to get nasty looks or comments from those who think it’s weird and unnatural.

While this can undoubtedly be really tough to deal with, there are ways around it. Nursing in a private bathroom is an option, but for those who don’t want to hide away, learning to ignore any negativity you’re faced with is crucial. It’s your choice how you parent your child, and nobody has the right to tell you how it should be done.

Another potential downside is that some mothers have found it more difficult to wean their child off the breast once they’ve extended breastfeeding. It’s no secret that toddlers can be extremely stubborn so it’s understandable it may be a little tougher to get them onto solids after the age of two. Of course, that doesn’t mean it’s impossible, you just may need to be patient and a little more understanding than you would if you’d weaned them earlier.

When Should Extended Breastfeeding Stop?

Some experts recommend breastfeeding should stop once your child reaches three to four years of age. Some mothers have chosen to breastfeed for a little longer than this, but ideally your child should be no older than four years old.

Choosing to extend breastfeeding can be daunting. However, there are some tips you can follow to make it a more enjoyable experience.

Firstly, you’ll want to find other moms who have also chosen to extend breastfeeding. They’ll be able to provide support and encouragement. Having people to talk to who are going through the same thing can help you to realize you’re not alone and help you to build up a support network.

If you’re really worried about the criticism and negativity you might face, you could breastfeed your child before heading out of the house. Aiming to breastfeed them once in the morning and then once in the evening will eliminate a lot of potential embarrassment. They can then drink your breastmilk out of a cup throughout the day.

If you still come under fire for extending breastfeeding, it can help to have some answers prepared. Ultimately though, you don’t have to explain your choices to anyone. It’s your business how long and how often you breastfeed for.

As you can see, there’s a lot of benefits which come from extended breastfeeding. However, it’s understandable it might not be for everyone. There are pros and cons which need to be considered before deciding what is right for you and your child.

Did you extend breastfeeding your child? How did you find it? Let us know in the comments below.