10 Things Nobody Tells You About Pregnancy 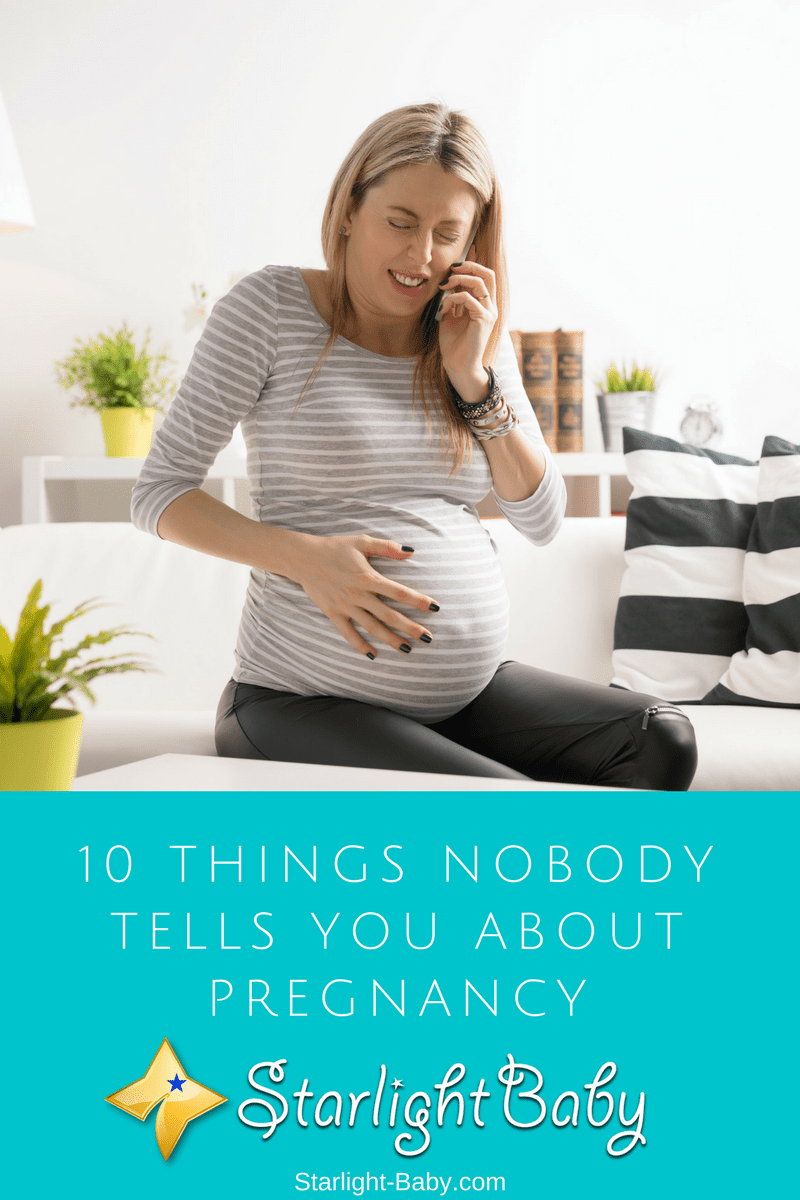 Every woman’s pregnancy journey is a little different. For some, it’s a wonderful, exciting journey that they breeze through with very minimal side effects. For others, it’s hard just getting out of bed every morning due to unbearable morning sickness.

While you come to expect a lot of potentially nasty side effects and discomfort, there’s a surprising number of ailments and experiences you can go through in pregnancy which you may not be aware of. So, here, we’ll look at 10 things nobody tells you about pregnancy to ensure you’re well-prepared.

It’s one of the main symptoms many women are totally unprepared for. The all-day sickness can range from feeling a little queasy, to what feels like you’re vomiting non-stop. If you do experience severe sickness, it’s worth visiting the doctor as you could be suffering from a condition known as Hyperemesis Gravidarum. This is an extreme form of morning sickness which can result in hospitalization.

When you first find out you’re pregnant, you may have the very best intentions to eat healthily. Under no circumstances will you fall into the “eating for two” excuse to be greedy. However, the cravings developed throughout the pregnancy can be really difficult to ignore.

Many women find themselves suddenly craving junk food. Anything carb-related will become a must-eat food. So, expect to start indulging in doughnuts, cakes, bread and cookies. Eating healthy can be extremely difficult during pregnancy so this is definitely something to be aware of!

3. You’ll Get Some Seriously Weird Cravings

Speaking of diet, you’ll also develop some pretty weird cravings. Now, cravings are a well-known part of pregnancy and you expect them to be weird to some degree. However, while you may be expecting to start indulging in strange food combinations such as ice cream and pickles, what you may not be expecting is a craving for sponges!

It’s actually pretty common for women to crave seriously weird non-food items when they’re pregnant. As well as chewing on new sponges, some women find they’re attracted to the smell of dust, others even crave charcoal. If you do experience these types of cravings, it’s best to visit a doctor as chewing on sponges and charcoal may have nasty side effects.

4. You May Experience Pelvic Pain

Pregnancy, especially the later stages, is packed full of aches and pains. However, pelvis pain isn’t something you’re typically prepared for. As your body gets ready to give birth, it starts to go through quite a lot of changes. A hormone known as “Relaxin”, is released to soften up the tendons, muscles and ligaments. This allows much more flexibility, but it can also cause problems for some women later in pregnancy.

The pelvis is made up of two halves and they’re held together by a joint. In later pregnancy, this joint can separate completely, triggering Symphysis Pubis Dysfunction. This in turn can cause a lot of backache and pain when standing, sitting and walking.

5. You May Develop Hemorrhoids

Another medical condition you likely aren’t prepared for is hemorrhoids. It’s estimated around 50% of pregnant women develop hemorrhoids throughout their pregnancy. They do usually disappear after the birth, but in the meantime, they can be extremely uncomfortable to live with.

Another thing which doesn’t help, is that your expanding uterus places a lot more pressure onto the veins within the rectum. This can cause the hemorrhoids to become worse. You’ll especially find it painful or uncomfortable to sit for long periods of time – something you’ll definitely want to do during the later stages of pregnancy!

At some point, your breasts are going to start to leak. However, it’s the leakage which comes from other parts of the body which can come as a surprise. Vaginal discharge is extremely common in the later stages. You’ll start to feel like you’re leaking from practically every orifice.

7. You May Start To Have Pretty Weird Dreams

A lot of pregnant women experience very vivid dreams. It’s all down to the changing hormone levels and the types of dreams you have will depend upon which stage of pregnancy you’re at.

Pregnant women are also more likely to remember their dreams. This is because you typically spend more time sleeping and waking up more throughout the night. Whether it’s because baby is moving around, you develop heartburn or you need to get up more frequently to urinate – the waking stage is when you typically remember the dreams you were having.

8. People May Start To Drive You Crazy

At first, seeing the joy on everyone’s faces when you reveal your pregnancy and your bump starts to show, can be amazing. You love the attention and the excitement over your little miracle. However, it can soon start to go from awesome to annoying!

You’ll find complete strangers start coming up to you, automatically placing their hand on your bump. You’ll start to receive all kinds of unsolicited advice and opinions, not just on pregnancy, but the birth and how you should handle baby’s first year. You’ll even start to hear some pretty horrendous birth stories which, let’s face it, you could really do without!

It will drive you crazy and no doubt increase your anxiety levels! However, it’s best to smile politely, nod, and remember this is your journey and although annoying, other people do mean well.

The most common image of a sonogram you tend to have, is where you’re lying on a bed with a doctor rubbing cold gel and a little device over your stomach. It’s what you’ve seen on TV many times before. However, this isn’t how the very first sonogram may go.

If you have a sonogram during the first trimester, it isn’t possible for the doctor to see baby through your stomach. Instead, they have to look from the same angle as how your baby actually got there! So, it can come as a bit of a shock if you’re not expecting it.

10. You’re Likely To Feel Exhausted Throughout Your First Trimester

As well as morning sickness, the first trimester of pregnancy can also cause exhaustion. Now, you may have heard that you’ll feel tired during the first trimester, but until you’ve actually experienced it, you truly have no idea just how tired you’re going to be.

No matter where you are, you’ll often find yourself wanting to sleep. It’s exhausting growing a little person inside of you, so you will need to rest a lot more during the initial first stages. It will usually fade after the first trimester and you’ll start to feel a lot more energized. So, until it passes, enjoy getting some extra sleep while you can!

The above are just 10 of the things nobody tells you about pregnancy. Some can come as a real shock to the system and can be pretty rough to deal with. However, now you’re aware of them, you can go into your pregnancy much more prepared. There’s always going to be side effects which you aren’t prepared for. Just remember, it’s all part of the journey and in nine months, it will all be worth it.