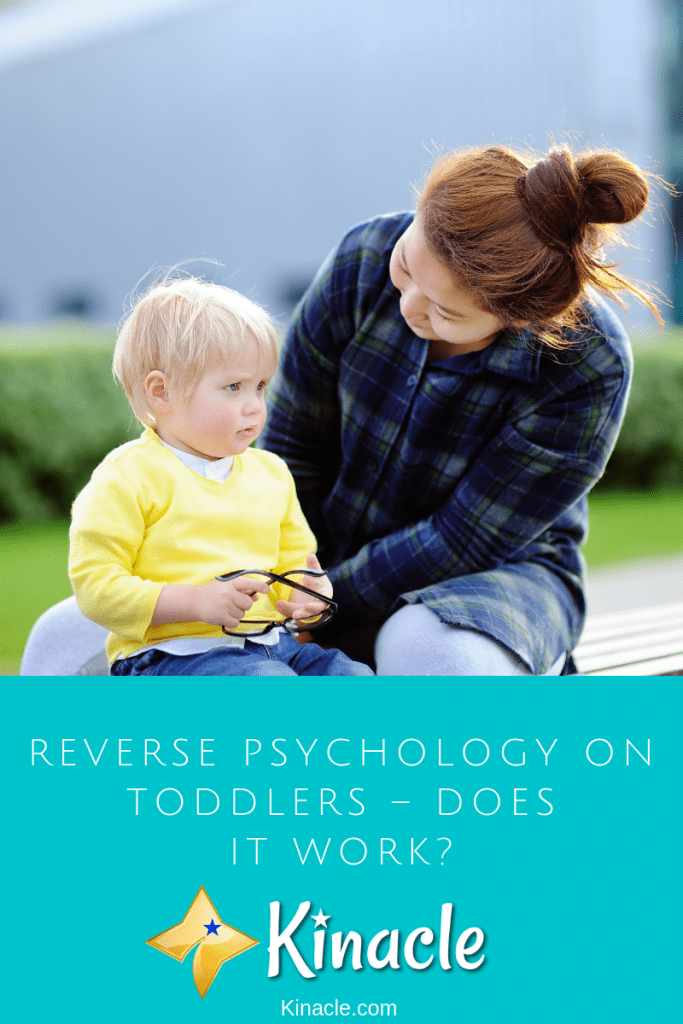 Over the years, parents have found many tricks and methods to make parenting that little bit easier. While parenting a toddler can never really be classed as easy, there are some techniques which have shown to be pretty effective. One of these techniques is reverse psychology.

How Does Reverse Psychology Work?

Reverse psychology can be confusing when you look at it’s definition. The Cambridge English Dictionary defines it as “a method of trying to make someone do what you want by asking them to do the opposite and expecting them to disagree with you”. In the case of a toddler, you want them to eat their veggies, but you know by asking them to, they won’t want to do it. So, instead you tell them not to eat their veggies and that triggers them to want to eat them.

It’s considered a strategy where you hide what you really want and ask for the opposite. If used excessively, it can also be considered a manipulative technique. That’s why there is a lot of controversy over whether or not it should be used on our children. However, some parents swear by reverse psychology as it has helped them to condition their toddler to make healthier choices – at least in the short term.

When Can You Use Reverse Psychology On A Toddler?

There are many scenarios where you can use reverse psychology on a toddler. From getting them to go to bed at a specific time, to tricking them into eating their veggies – it can be used to encourage many different types of behaviors and habits.

The key to really making it work is to make it fun. So, if you are trying to get them to eat their veggies for example, you could say something like:

Obviously, every toddler is different but for many, the thought of growing big and strong and turning into a dinosaur is extremely appealing! So, it tricks them into actually wanting to eat the foods they initially said they didn’t want.

It’s important to note that you shouldn’t try to use reverse psychology if you’re stressed out or if you’re in a rush. It’s best used when you’re calm and when you can use it in a fun manner.

Reverse psychology does work especially well on toddlers due to the fact that they enjoy going against their parents wishes. They are learning about the world around them and where they fit in with that. This means they are constantly trying to be more independent and vocal about what they want, or don’t want. Doing the opposite of what their parents say is all part of their development, and that’s where reverse psychology really shines through.

However, it’s not always going to be guaranteed to work. Some toddlers may not be ready for reverse psychology. They also have very different personalities so like any parenting technique, it won’t work on every toddler.

Being Aware Of The Dangers

Before deciding to try out reverse psychology on your little one, it’s worth being aware of the potential dangers.

If used too often, it can actually make your toddler feel like they have more control over things than they actually do. This means, they could end up testing their control more frequently, then wondering why it isn’t working. So, rather than helping to encourage good behaviors, it can give toddlers a power trip that will ultimately lead to a lot more stress and frustration.

If it is used frequently and not in a fun way, it also poses the risk of turning into more manipulative behavior. Some experts also believe that by using it, you’re ultimately teaching your toddler not to listen to you. It makes sense given that you are telling them one thing and then they are rewarded for doing the other. Once they figure out what reverse psychology is, they also learn that you don’t mean what you say. In this sense, this is seen by many as a form of allowing bad / unintended behavior, which can make discipline more challenging later on.

So, there are some pretty compelling dangers that come with using reverse psychology on a toddler. However, provided you only use it sparingly, it can be an effective parenting method to tackle things such as getting them to bed on time or encouraging them to eat a healthier diet.

It’s important to take both the positives and the potential negatives of reverse psychology into account before you decide whether or not to use it on your child. Ideally, it should only be used as a last resort if nothing else is working. Generally speaking, positive parenting and rewarding good behavior tends to work far more effectively.