I think we can all agree – as new parents, the absolute scariest thing to think about is something happening to our baby.

While this fear is perfectly normal, the anxiety surrounding this can drive us crazy. The anxiety can keep us up at night and prevent us from getting the sleep we so desperately need – yet never get enough of.

One of the most common fears new parents experience is the fear of SIDS – sudden infant death syndrome. Although incredibly rare, it is perfectly normal to worry that it could happen to us.

This is why many parents turn to baby movement monitors, like the monitor we’ll be reviewing today – the Snuza Hero SE. Although you’ll certainly hope that it will never be necessary, the peace of mind a device like this can provide can provide some much-needed comfort.

But is the Snuza Hero SE actually worth it, or would it be a waste of your money?

What Does The Snuza Hero SE Actually Do? 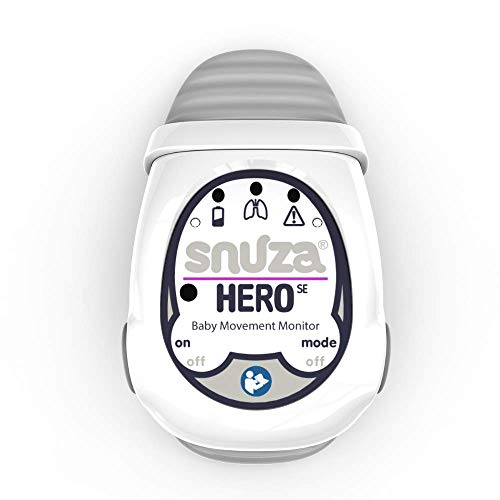 To put it simply, the Snuza Hero clips onto your baby’s diaper, and monitors the movement of your baby’s abdomen while they sleep.

If movement drops (indicating that the baby is not breathing as they should be), the device will start to vibrate – with the goal of bringing them out of deeper sleep in order to trigger regular breathing again. If this does not happen, a loud alarm goes off to alert you.

How Effective Is It?

The Snuza Hero SE can detect even the smallest of movements, even if these movements aren’t visible with your eyes alone.

From our experience testing out the monitor, it’s also comforting to know that this thing is very loud. You should be able to hear it even if you are sleeping deeply, and your baby is another room. Considering that this is one of the most important features of the device, it does very well in this area.

But what about actually preventing SIDS?

Unfortunately, there has been a lot of debate in the effectiveness of baby movement monitors in general – not only with the Snuza Hero SE. That being said, Snuza CEO Greg Gallagher stated in 2016 that they haven’t had a single death reported while using the device.

Reviews from customers on Amazon also attest to the effectiveness of the Snuza Hero SE, describing times in which the device has saved their baby’s life.

Again, I do not want to suggest that an event like this will happen with every parent. However, it does seem that if the device is needed, it carries out its job reliably, which hey – is pretty darn important in a product like this!

The number one issue parents have with the Snuza Hero SE is the fact that it’s almost too sensitive to the lack of movement.

In other words, there is the potential for false alarms. And obviously, you hope when buying this that you never are woken up to its alarm in the middle of the night.

The probability of false alarms increases as your baby ages, and they begin to roll over in their sleep – which can cause the Snuza Hero SE to fall off.

Of course, the need for a device like this also decreases as the child ages, so you’ll likely stop using it before this becomes too serious of an issue.

Additionally, making sure that your baby’s diaper is on snugly can cut down on false alarms as well. The device has to be touching your baby’s abdomen in order to detect movement, so if the diaper is loose, it may not sense the movement properly and well, start beeping when it shouldn’t be.

This was the number one complaint that parents have with the Snuza Hero SE, so we had to include it.

Personally, I’d rather have a few false alarms than have it fail to work if I ever needed it!

Naturally, you may wonder whether or not the Snuza Hero SE will cause any discomfort to your baby. Fortunately, this doesn’t really seem to be an issue. Chaffing or skin irritation aren’t something that’s commonly reported with the use of this baby monitor, and it doesn’t seem to disrupt baby’s natural sleep patterns in any way.

However, if this is something you’re worried about, you can clip it onto a piece of clothing above the diaper, such as sweatpants. Just be sure that it is still resting in the same position.

Let’s look over some of the most common questions we’ve received about the Snuza Hero SE Baby Movement Monitor!

How long does the Snuza Hero SE battery last?

The Snuza Hero SE’s battery should last for around 2,000 hours. However, some parents have reported that the batteries that the Snuza came with were near-dead when the product arrived.

If you want to replace them, the Snuza Hero SE is powered by CR2 batteries. The original Snuza Hero (NOT the SE) is powered by a 14250 size battery, so be careful not to get the replacement batteries mixed up!

When the battery on the device starts to get low, a red indicator light will come on, alerting you that it’s time for the battery to be changed.

Is there an app for the Snuza Hero SE?

No, there are no external smartphone apps. The Snuza Hero SE also does not have any Wi-fi or Bluetooth connectivity. Many parents see this as a positive, as they don’t have to worry about unreliable connections, or have a Wi-fi enabled device next to their baby’s abdomen so frequently.

Can you use the Snuza Hero SE if you’re co-sleeping?

Unfortunately, no. The device becomes unreliable when co-sleeping due to the additional movement. Therefore, it’s only usable if your baby is sleeping by themselves.

Does the Snuza Hero SE work for stomach sleeping babies?

Yes! There won’t be any issues if your baby prefers to sleep on their stomach.

These are often used interchangeably, however they are different models. The SE is the more current and more popular model, and is essentially an updated version of the original Snuza Hero.

Are there any other features?

Yes! Aside from being completely portable without any additional cords or pads, the Snuza Hero SE also has a small green light that flickers with each breath, so you can see that your baby is breathing even from a distance (or from a video baby monitor.) Optionally, you can also have the device emit a small audible tick with each breathe as well.

View the Snuza Hero SE on Amazon by clicking here!

Most people that purchase a baby movement monitor will never actually be put in a situation where they need it. However, that doesn’t mean it isn’t worth picking one up.

Even if the Snuza Hero SE is never necessary in order to save your baby’s life, the peace-of-mind that this device can bring is worth it on its own, in our opinion!

If you have any questions about the Snuza Hero SE, please don’t hesitate to ask us using the comment form below!

Popular On Our Store