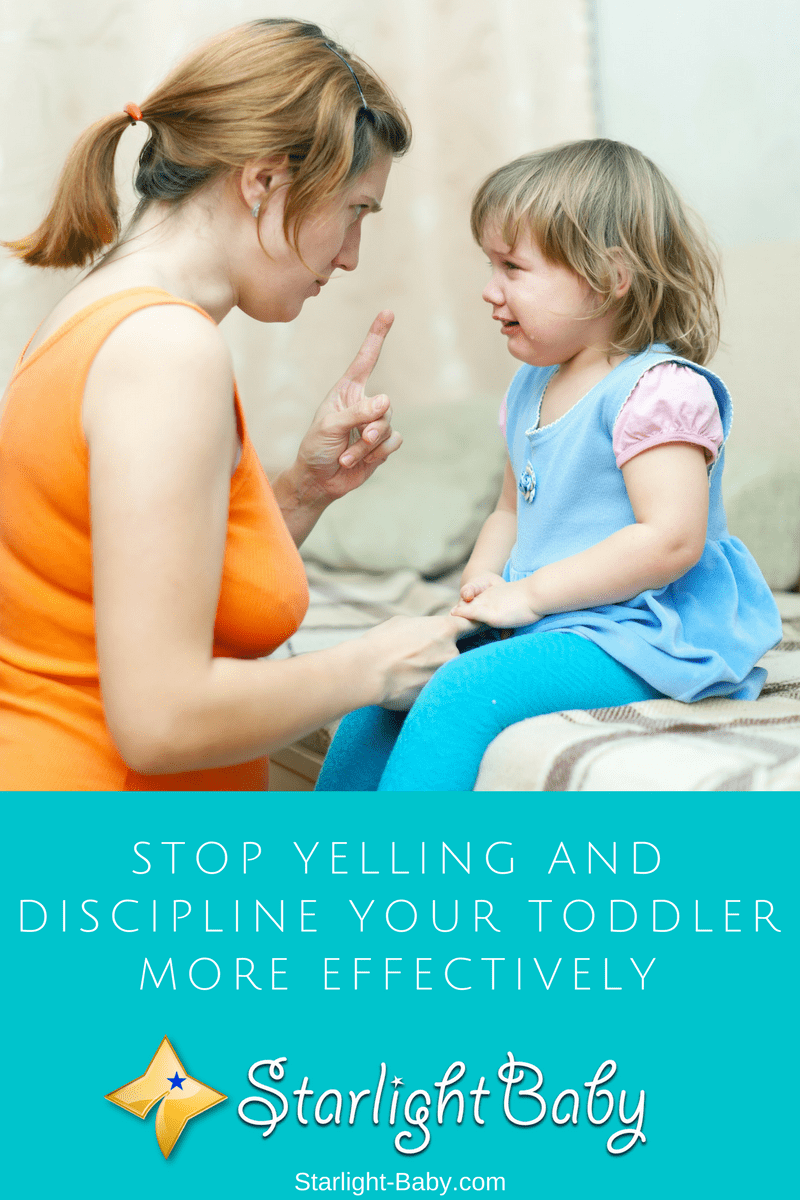 Being the parent of a toddler is a wonderful, yet an extremely challenging job. Love them as you do, some days they can drive you absolutely crazy!

The endless battles, tantrums and constant destruction can push even the calmest parent to their limit. However, before you lose it completely, there’s a few tips you might want to try out.

Yelling may make you feel better for a few seconds, but sadly it very rarely proves effective when it comes to discipline. It’s also been proven via numerous studies to have a detrimental effect on your toddler.

Remaining calm on the other hand, allows you to make your point in a more productive way. It’s not easy, but with a little practice, the tips below can help you to stop yelling and discipline your toddler more effectively.

I know, this tip can be infuriating! The last thing you feel like doing when you’re about to lose your mind is breathe deeply. In fact, you might want to punch the person recommending this tip in the face. However, there’s a reason it’s often provided as the number one tip to keep your cool – It works!

This method works just like a time out for your toddler. It allows you to calm down, collect your emotions and then deal with the situation in a calm, rational and productive way. It’s best to address any conflict or problem in a calm manner, and deep breathing can be extremely effective at helping you keep your cool.

2. Try To Be More Organized

Do you notice you yell more at specific times of the day? For example, a lot of parents tend to find they yell more during the morning rush. The stress of rushing around combined with the frustration of your toddler doing the opposite of everything you tell them, can trigger a yelling attack.

While it’s difficult to see it in this environment, the reason you’re yelling isn’t actually directly to do with your toddler’s bad behavior. It’s because you’re not organized. Once you identify the triggers which typically set you off, you can then work on minimizing them. So, if you do find yourself losing it in a morning, why not try getting some things sorted out the night before. It may not stop your toddler’s bad behavior, but it will help to ensure you’re calmer when you address that behavior.

3. Don’t Expect Too Much

Often, the reason we end up yelling at our toddlers is because we think they’re being defiant. While there are times your little one will try to test the boundaries, most of the time they’re not actually trying to be defiant. Instead, they simply don’t have the skills or right level of development just yet to behave how you might want them to.

A good example is if you’ve told your toddler to tidy their toys away for the past four days. By the fifth day, they still haven’t done it and their reasoning could be they simply forgot. You see this as an act of defiance, but the truth is they very likely did just forget. They have very short attention spans and some tasks they just aren’t capable of doing yet.

The key is to only give your toddler tasks you know they can handle. You know their abilities better than anyone, so try not to expect too much and adjust your expectations accordingly.

4. Try To Discipline As Though Somebody Is Watching

As a parent, you spend a lot of time biting your tongue when you’re out in public. The last thing you want is to completely lose your cool in front of an audience. How devastated would you be for someone to see you yelling at your toddler? If the answer is very, you can use this simple technique to reduce your urge to yell – pretend somebody is always watching.

Now, out of all of the tips mentioned here, this one is probably the hardest. It’s pretty tough to remain in the mindset that somebody could be watching. It’s easier if you’ve actually been caught off-guard and a neighbor or stranger has overheard your yelling as you’ll know exactly how humiliating it feels. However even if you haven’t experienced it, if you just remind yourself as you feel the anger rising, that somebody could be watching, it at least makes you stop, take a deep breath and approach the situation in a calmer manner.

Have you ever seen those stress toys you can buy which supposedly help to manage stressful situations? Well, they can actually be pretty awesome at diverting all that built-up rage!

While they come in numerous shapes and sizes, stress balls are the most popular option. Whenever you feel yourself getting worked up, simply squeeze the ball and the stress disappears. It sounds a little too simple, but it’s really effective. So much so, that they’re mostly used by business executives who have to deal with a stressful job. So, if you haven’t tried it yet, now’s the time to invest in a stress toy.

6. Remember That Yelling Causes You To Lose Authority

You might think that yelling gives you authority, but it actually takes it away. When you yell at your kids, you’re showing that you’ve completely lost control. You’re putting yourself on the same level as your toddler, rather than being a calm, responsible adult. This will make it much less likely that your toddler will respect and look up to you.

So, if you feel the urge to yell, remember if you do you’ll lose authority and in turn suffer further problems down the line.

Of course, it’s not easy to stop yelling and there may be times you slip up. However, it largely comes down to stress control. If you can reduce the amount of stress in your life, you’ll automatically feel a lot calmer and better able to deal with the pressures of parenthood.

Overall, the tips above will help, but it’s important to remember it will take practice. If you’ve got into a pattern of yelling, it’s going to be difficult to just snap out of it. However, with perseverance and commitment, it is possible to change your parenting method.