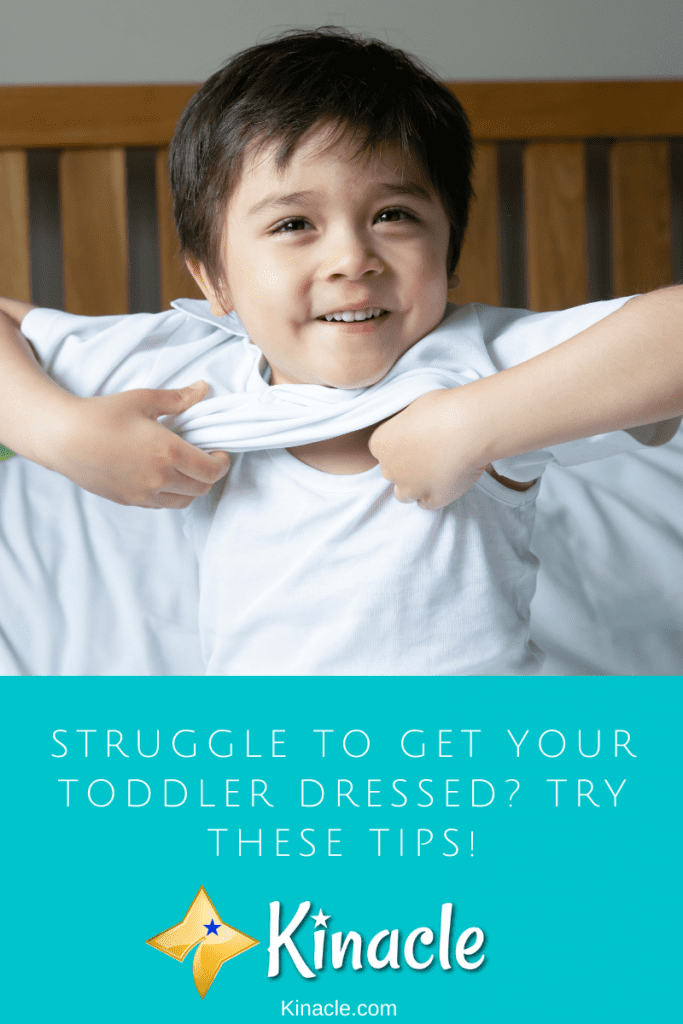 Do you struggle to get your toddler dressed in a morning? If so, you’re certainly not alone!

There are a lot of challenges which come from parenting a toddler and getting them ready in a morning can be one of the most frustrating. Every morning can turn into a battle of wills between you and your little one, adding a lot of unnecessary stress onto your day.

However, there are ways to eliminate that all too frequent morning battle to get your toddler dressed on time. Here, we’ll look at some of the best tips you can try to eliminate those morning outfit battles.

Give Them A Little Control Over Their Outfit

Did you know one of the main reasons toddler’s fight getting dressed in a morning is often down to a lack of control? If everything seems like it’s a battle lately, your little one is probably going through a phase of claiming their independence. So, if you want to eliminate the potential tantrums when it comes to getting your toddler dressed, the key could be to give them options.

Letting them choose what they want to wear will make them much happier. However, it’s important to state here that you’ll only want to give them a couple of options. Choose two to three outfits you feel are suitable for the day, then let your toddler decide which one they want to wear. This gives them the illusion that they made the decision, even though you’d chosen the main options.

Of course, some days this tip isn’t going to work. Your toddler may be dead set on wearing that pirates’ outfit or pretty princess dress and nothing will talk them out of it. However, most of the time you should find giving them a few options does help to minimize the mini-meltdowns which often occur when getting them dressed.

Get Them Ready Earlier

Virtually nothing is more stressful than trying to get a toddler dressed when you’re in a rush! However, this is also when the majority of problems start. When you’ve only got 5 minutes to get your little one changed and out of the door, you’re understandably going to be snappier and a lot more stressed than you would be if you had loads of time to spare.

So, if you’re always rushing in a morning, try getting up a little earlier. This gives you the chance to get a head start on the things you need to do, while also ensuring your toddler is ready earlier. When you don’t have to rush, the getting dressed stage will be a lot more relaxed, which in turn will help to stop your toddler from associating getting dressed with high levels of stress!

Use A Reward System

Some parents find a reward system a great way of getting their little one dressed. Whenever your toddler gets dressed by themselves without any fuss or reminders, give them a reward sticker (or something similar). Then, after they have received a set number of stickers, you can give them a reward.

It’s worth noting here that you should tell your toddler what the stickers are for and why they have ben given them. You should start to see that your toddler learns to associate getting dressed by themselves as a positive thing.

A clever way to make getting your toddler dressed in the morning, is to choose each other’s outfits. Or at least that’s how you’ll phrase it to your toddler!

They’ll be so excited that they get to pick your outfit, that they’ll be more than happy to wear whatever you’ve picked out for them too. It’s a clever game which can really make getting them dressed in the morning a lot more enjoyable. The trick is to have a few outfits that you actually want to wear, then let your toddler choose between them. If you don’t limit their options, you may be forced to wear something totally ridiculous!

Know Which Battles To Let Go Of

Some days, your toddler isn’t going to want to wear anything you even remotely suggest. They also aren’t going to listen to reason when you tell them they can’t wear their pajamas to daycare. So, rather than fighting them on it, why not let them realize why you didn’t want to let them wear the outfit in the first place?

If it’s a cold day, your toddler will soon realize why it was a bad idea to wear pajamas rather than a sweater and jacket. There is also the chance their peers may make fun of what they are wearing, which would deter them from wearing it again. Sometimes kids just need to learn things on their own. So, try not to get too worked up over their outfit choices. It’s only temporary and there are so many other battles you need to prepare for in the day!

Consider Dressing Them When They First Wake Up

Finally, another tip you can try is to dress your toddler as soon as they wake up. That way, they’ll be half asleep, so they won’t really be any fit state to fight you over their outfit. You’ll also get it out of the way, so the morning isn’t as rushed.

Obviously, there’s a danger they could spill something on their nice new clothes, especially when it comes to eating breakfast. However, you should find that most of the time, with a little planning ahead and spill management, getting them dressed early can be really beneficial.

These are some of the best tips you can follow to get your toddler dressed without incident in the mornings. Keep in mind that some days, no matter what you try, your toddler will simply refuse to wear anything you want them to. It’s a phase that will pass, so try not to get too stressed out over it.