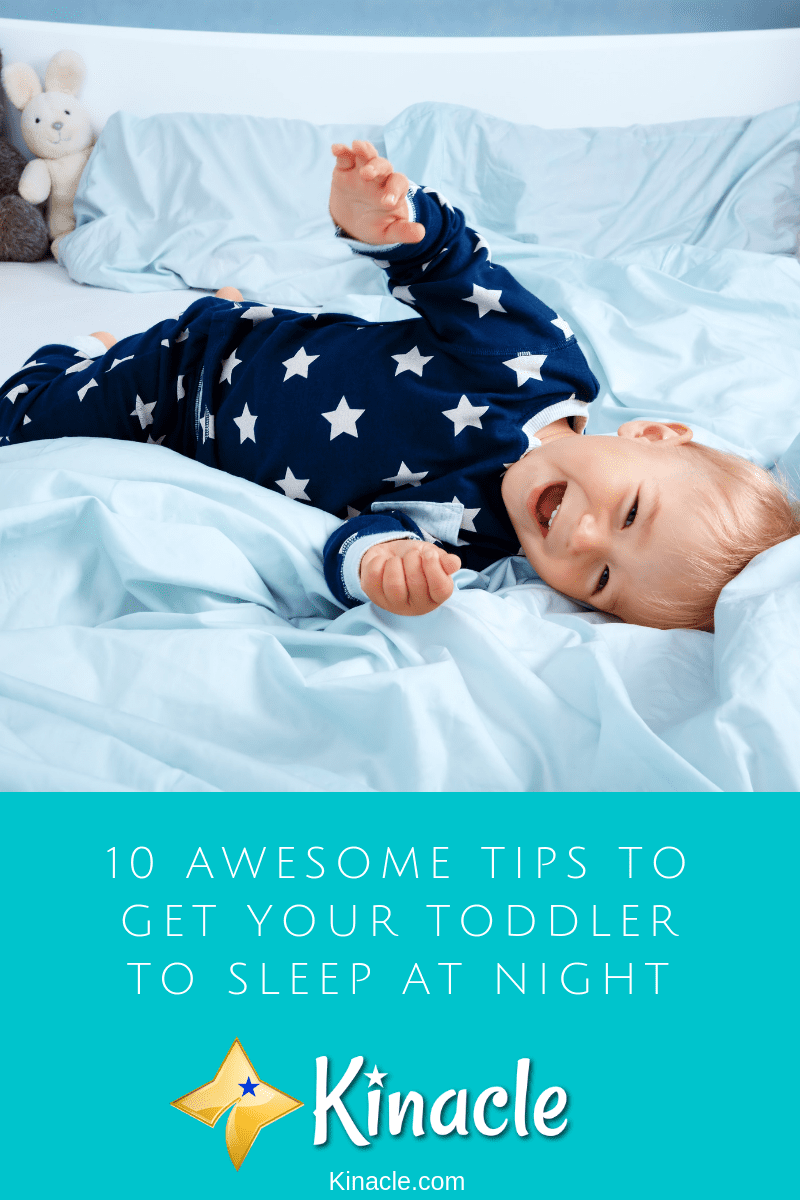 It’s common for toddlers to go through phases where they simply don’t want to fall asleep. Getting them ready for bedtime can start to become a dreaded chore that neither of you looks forward to. The tough nights can leave you feeling tired and stressed out the next day. So, how can you break the pattern and get your toddler to sleep?

1. Ensure Their Room Is Dark And Quiet In The Mornings

A common problem parents have with their toddler’s sleep routine, is they wake up far too early. It’s typically for toddlers to wake between the hours of 5am and 7am.
However, if your little one tends to wake earlier than this, there are things you can do to help encourage them to sleep in a little.

Does their room let a lot of light inside in the morning? If so, blackout blinds are exactly what you need. These will help to keep the room pitch black, encouraging your toddler to go back to sleep. Similarly, if there is a lot of noise in the mornings from passing cars or birds chirping away, you’ll want to try and make the room quieter. White noise machines are great for this and could definitely be worth trying out if your toddler is a light sleeper.

2. Give Them A Little Control Over Their Routine

One of the main reasons that toddlers tend to resist bedtime is because they don’t have any power. They are being told when to go to bed, which pajamas they are going to wear and which books they can have read to them.

You probably already know by now that toddlers HATE losing power. They will happily argue with you and go into an epic meltdown if they feel they are being forced into something they don’t want to do. So, what’s the secret to nipping this behavior in the bud? Giving them a little more control!

Don’t give them any power over when they go to bed but do give them options involving their bedtime routine. Let them choose which pajamas they want to wear, and which book they would like you to read. It sounds simple, but this tip alone can help to make bedtime battles a thing of the past.

3. Pile On The Praise In The Morning

Many parents have tried and failed with the popular reward system method. That is, for every night their toddler stays asleep, they get a shiny sticker which ultimately leads to a reward. The thing is, this method often works great for a few nights. However, it can quickly lose its appeal!

So, instead of trying out the reward system, why not pile on the praise in the morning instead? If your toddler has had a good night and they didn’t kick up much of a fuss before bed, really praise them in the morning. Tell them how good they did and how awesome they are. They thrive on pleasing you, so if they get plenty of praise for staying in bed and sleeping, it’s going to make them more likely to do it again.

4. Make Sure Their Routine Is Designed To Make Them Drowsy

If your toddler is struggling to get to sleep, it could be down to their routine. It’s important to make sure their routine is quiet, calm and relaxing. You’ll want to avoid letting them use any form of electronics an hour before bed. The light from screens such as smartphones and tablets, can keep the brain awake for longer. So, not letting them watch TV or stare at a screen an hour before bed is a great tip to follow.

You’ll also want to avoid playing any exciting, energetic games before bed. The key is to keep it calm to encourage them to start winding down.

5. Always Stick To The Same Routine

We’ve highlighted this tip a lot in previous blog posts, but it cannot be stressed enough. It’s so important to make sure you’re sticking to the same routine every single night.

Toddlers need a routine, especially at bedtime. If you’re always changing it, you’re going to experience a lot of trouble trying to get them to bed every night. So, set a bedtime and stick to it.

Of course, there may be times when it just isn’t possible to put them to bed at the same time as usual. However, the odd night isn’t going to cause too many problems, just as long as you stick to a routine the majority of the time.

6. Don’t Be Tempted To Let Them Into Your Bed

Even if your toddler is ill, you should be wary of welcoming them into your bed. It’s really important to stick to boundaries if you don’t want to be sleeping with your child until they start school!

7. Check They Are Having Adequate Naps During The Day

If your toddler is still at an age where they need a nap during the day, always make sure they get it. Even if they don’t seem overly tired, ensuring they have a nap at the same time every day will help to prevent them from becoming overtired.

If the alarm clock itself isn’t enough to encourage your toddler to go to sleep, you could always get creative and tell them the alarm clock is controlled by Santa. Tell them Santa sets bedtimes for children and if they don’t stick to it, they won’t get many presents at Christmas. You can use any fictional character you think your toddler might listen to. It’s a white lie, but it’s one that’s going to help you to combat those sleep time battles.

When your toddler transitions into a big bed, they may find it a little daunting. Therefore, it’s a good idea to give them something they can use to self-soothe during the night. If you don’t want to give them a pacifier, you could give them a teddy bear or a blanket. Anything they find soothing should be provided so they can get themselves back to sleep if they do wake up.

The final tip that’s going to help you banish bedtime battles, is to make night time wakeups as boring as you possibly can. When toddlers cry out for attention during the night, it’s typically for a cuddle, or to simply see you. Instead of giving them a reason to be excited when they wake up, it’s best to make the wake up as boring as possible. That means, not really making a big deal out of anything.

The more boring they find the wake up, the less likely they’ll be to call out for you in the middle of the night. Instead, they’ll simply go right back to sleep.

So, there you have it – 10 awesome tips to get your toddler to sleep more. They may not always work, but they are going to increase the likelihood you and your toddler will get a lot more sleep.