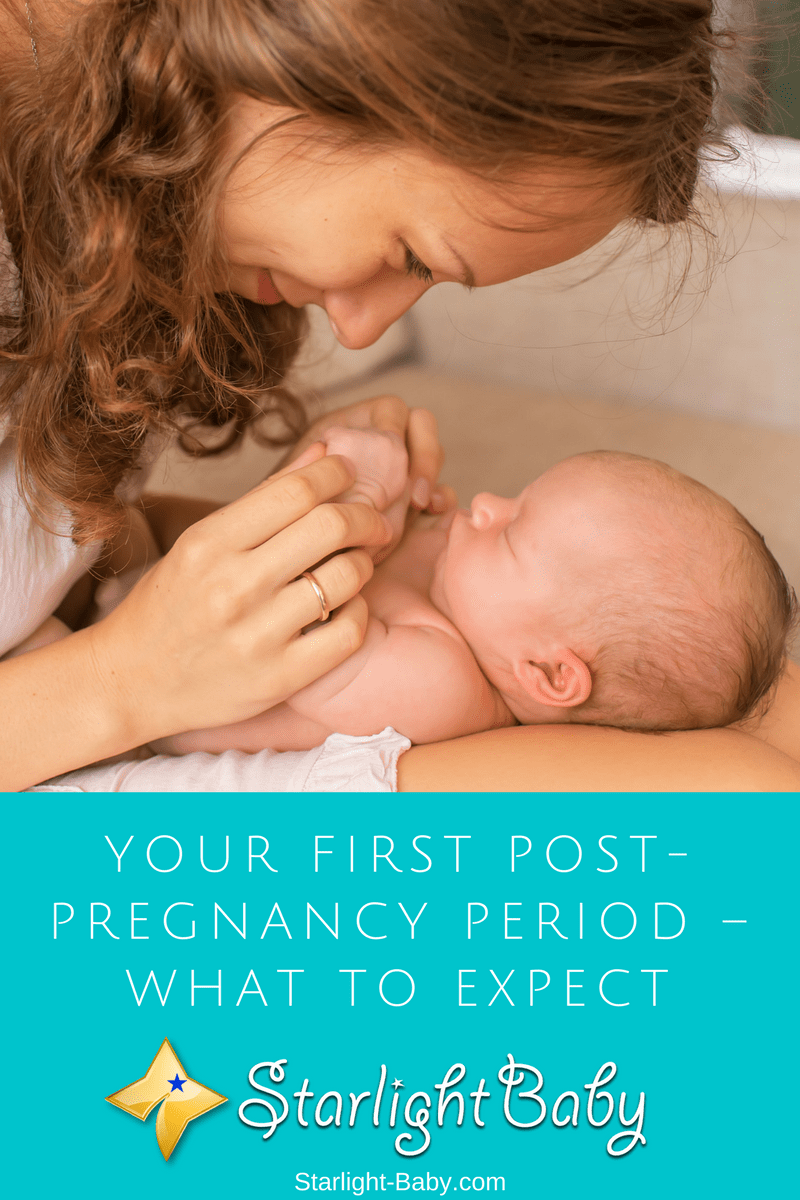 One of the best things about being pregnant, besides the fact you’ll have a baby at the end of it, is the fact you don’t need to worry about mother nature! The nine month break from having a period is definitely a major advantage of pregnancy.

The trouble is, after giving birth, it’s only a matter of time until your period makes a reappearance. After going nine months without one, it’s easy to get caught out by the return of your monthly cycle. It’s also possible that first period won’t quite be like the ones you used to have. So, to help you prepare, here you’ll discover everything you need to know about your first post-pregnancy period.

When Will It Start?

The reason breastfeeding moms don’t tend to get their first post-pregnancy period for up to eight months, is because of the Prolactin hormone. This is required by the body to produce breastmilk, and it suppresses your reproductive hormones. So, you won’t release an egg or ovulate while you’re breastfeeding. Some mothers even find they don’t get a period throughout the entire duration of breastfeeding.

It’s worth noting that if your period does start fairly quickly after giving birth, your doctor may advise against using tampons. This is because they could lead to trauma, so if you do use them, it’s always worth checking with the doctor to see when you can return to using them. It’s also important to note that bleeding and spotting is common a few days after giving birth, but it’s not actually a period.

Is It Possible To Get Pregnant Again Before It Arrives?

As many women have learnt the hard way, it’s absolutely possible to get pregnant before your first post-pregnancy period turns up. However, if you are breastfeeding exclusive, this does tend to act as a natural contraceptive. Just remember, like most forms of contraception, this isn’t 100% guaranteed to work.

The reason it’s possible to get pregnant before your period returns, is because the body ovulates before it menstruates. This means you’ll already be fertile before your period makes an appearance. Some women have even discovered they are pregnant again at their six-week postpartum appointment! So, if you don’t want to get caught out, it’s vital you use some form of protection.

Make sure you speak to your doctor or pediatrician prior to starting any form of birth control. Some of them aren’t suitable for nursing mothers so you’ll need to discover which one is right for you.

Now, some women will experience less pain and lighter cramps than usual, but the majority tend to suffer at least one of the symptoms listed above.

Can It Affect Your Breastmilk?

It is possible the return of your period could affect your breastmilk. This is down to the hormone changes which occur in the body. It could impact how the milk tastes and how baby reacts to it for example.

You may also notice that your milk supply slows down. However, any changes which do occur are usually very minor and they shouldn’t have an impact on your ability to breastfeed.

In many cases, new moms often discover their post-pregnancy periods are more painful than they were before, especially the very first one. There are numerous reasons for this including the fact your uterine cavity can become larger once you’ve given birth. This means, you’ll have a lot more uterine lining to shed.

After not having a period for over nine months, your first post-pregnancy period is also likely to be a lot heavier. As the cramps can be a lot more intense, this also causes pain levels to increase. Or, they could become more painful temporarily due to the hormones produced while you’re breastfeeding.

Symptoms You Should Watch Out For

While it’s impossible to tell exactly what your first post-pregnancy period will be like, there are some symptoms to watch out for. If you notice any of the symptoms below, you should contact your doctor just to be on the safe side.

Extremely Heavy Bleeding – If your pads are soaking through after just an hour, this isn’t normal.

Foul-Scented Discharge – If you notice a foul odor and there’s discharge present, you’ll want to get it checked out.

Bleeding For More Than 7 Days – Although your first post-pregnancy period can last longer than usual, you shouldn’t be bleeding heavily for more than 7 days.

Large Blood Clots – Larger blood clots are a common symptom of the first post-pregnancy period. However, they shouldn’t be larger than a softball.

Pain While Urinating – You shouldn’t experience any pain when urinating during your period.

Other Unusual Symptoms – If you notice you have a severe headache, a sudden fever, a sudden intense pain or trouble breathing, you’ll want to contact a doctor as soon as possible.

These are the main symptoms to watch out for. Of course, if there’s anything you’re concerned about you should seek advice from your doctor as soon as possible. It’s likely there isn’t a serious problem, but it’s still worth getting checked out.

The return of your period can be a nasty surprise and there’s no way of telling how severe it might be. Remember to stock up on plenty of pain medication (if you aren’t breastfeeding) and some additional pads just in case it is a lot heavier.