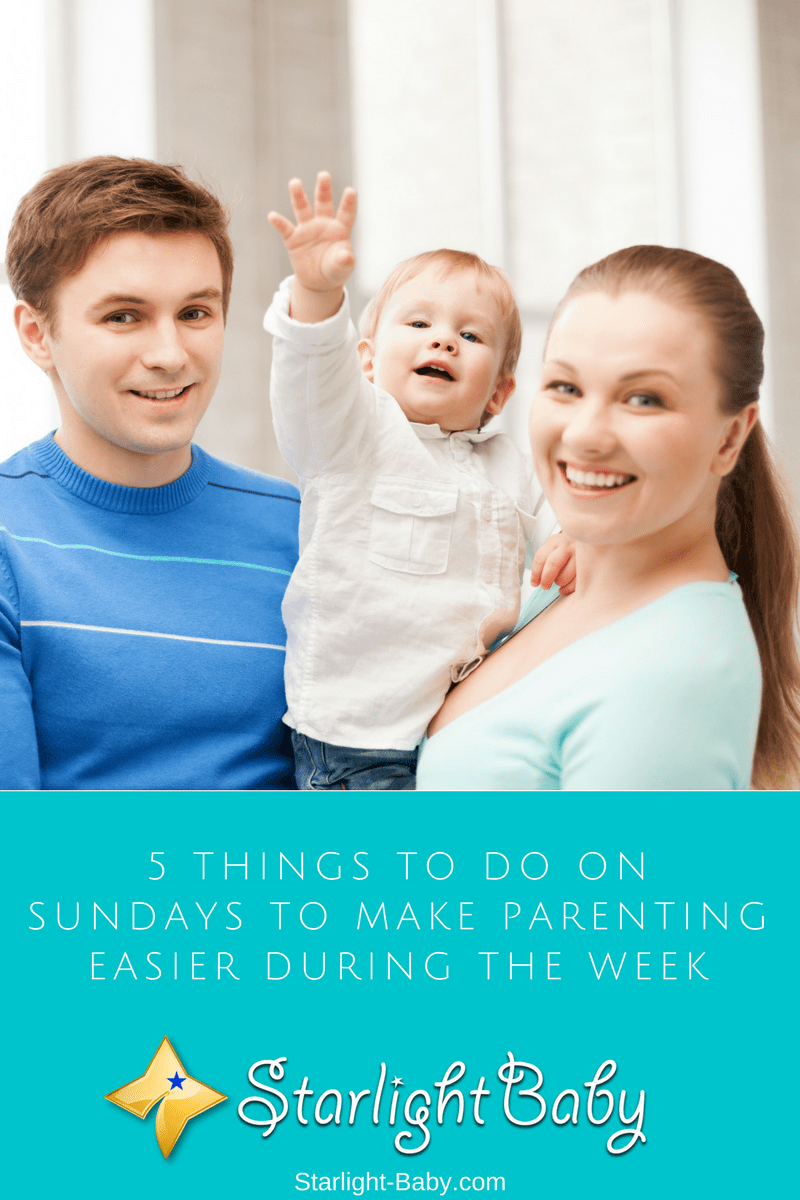 Feeling run down, stressed and exhausted? Being a parent is no easy feat and it can often feel like there just aren’t enough hours in the day to get everything done. With so many tasks to complete, it can easily become overwhelming and the stress just keeps on building day after day.

If you’re fed up of the constant daily battles to keep on top of everything, there is one way to make things a little easier. Carrying out certain tasks at the weekend could help make parenting much easier during the week. Sunday’s, for example, are a particularly great day to get ahead.

So, if you’re ready to make a change and get back in control of the situation, here you’ll discover 5 things you can do on a Sunday to ease the pressure during the week.

Seriously? How much stress could this actually save you? Well, it turns out simply planning outfits for both you and the kids can save you a lot of time, stress and frustration. How many times have you spent frantically trying to find clean clothes to get you and your little one dressed?

With so many other things to focus on, it’s easy to forget to put the washing in or put away clean clothes. Having to wear the same dirty clothing because you’ve barely had time to breathe, let alone check you have clean clothes, only adds to the stress and humility of parenting!

So, when Sunday morning arrives, make sure you’ve done the washing for at least the next few days. Then, organize the clothes into easy-to-find outfits. Placing entire outfits together when possible will save you a significant amount of time and hassle during the week.

Now, there’s some parents who live for cooking in bulk. They take great pride in preparing their meals in advance so they don’t need to worry about what to eat during the week. However, if you couldn’t think of anything worse than spending your entire Sunday cooking, you’re definitely not alone!

The good news is, there are ways to prep your meals without going all-in and cooking a mountain of food. You could simply cook “double meals” or just prepare the veggies.

Double meals are basically dishes that are going to leave leftovers. So, if you’re cooking a Sunday dinner for example, any leftover chicken could be used to create a separate meal the day after. You’ll have already done the most time-consuming cooking task (cooking the chicken), so it will still speed up the cooking process.

3. Have A Short Power Clean

Waking up to a messy house on a Monday morning doesn’t exactly fill you with positivity and motivation. So, why not take just 30 minutes out of your Sunday and do a quick power clean?

You could even set a timer and get help from older kids or your partner. Don’t attempt to clean the entire house – just focus on the most important tasks. You may find it easier to write a list of the things you feel need to get done, then tick off what you managed to do at the end. If you see it as a challenge, you’ll find it much more enjoyable and you’ll also be surprised by the amount of tidying up you can get done in just 30 minutes when you’re focused.

If the house is tidier at the beginning of the week, it’s going to make you feel a lot more relaxed and happier.

4. Fill In A Weekly Planner

This task doesn’t take much time at all, yet it can make a significant difference to the week ahead. Set a little time aside to fill out upcoming appointments and events. This will give you a good idea of what’s coming up over the next week, ensuring you don’t forget anything important.

Finally, you can also include a loose schedule for the week. It’s a great way to stay organized and ensure your time is spent more wisely. For example, if you tend to be more productive and motivated first thing in the morning, schedule to take care of chores or preparations for the day as soon as you wake up. That way, you have the rest of the day to simply relax and spend time with baby.

5. Avoid Leaving EVERYTHING Until Sunday

As useful as it can be to do certain things on a Sunday, many parents make the mistake of trying to do too much. As it’s often the only real day-off, or rather the least hectic parenting day, it’s common to leave everything until Sunday.

This isn’t a good idea at all as you’ll end up feeling stressed out on the one day you should be relaxing. Then, what’s going to happen is you’re going to wake up on Monday feeling like you haven’t really had a break. It’s really important to find a balance between prepping for the week ahead and enjoying a little relaxation time.

Overall, doing certain tasks on a Sunday can make a massive difference to the rest of your week. Even if you just do one thing from the list above, you’ll find it really makes parenting easier during the week.

Have any tips of your own to share? We’d love to hear them!