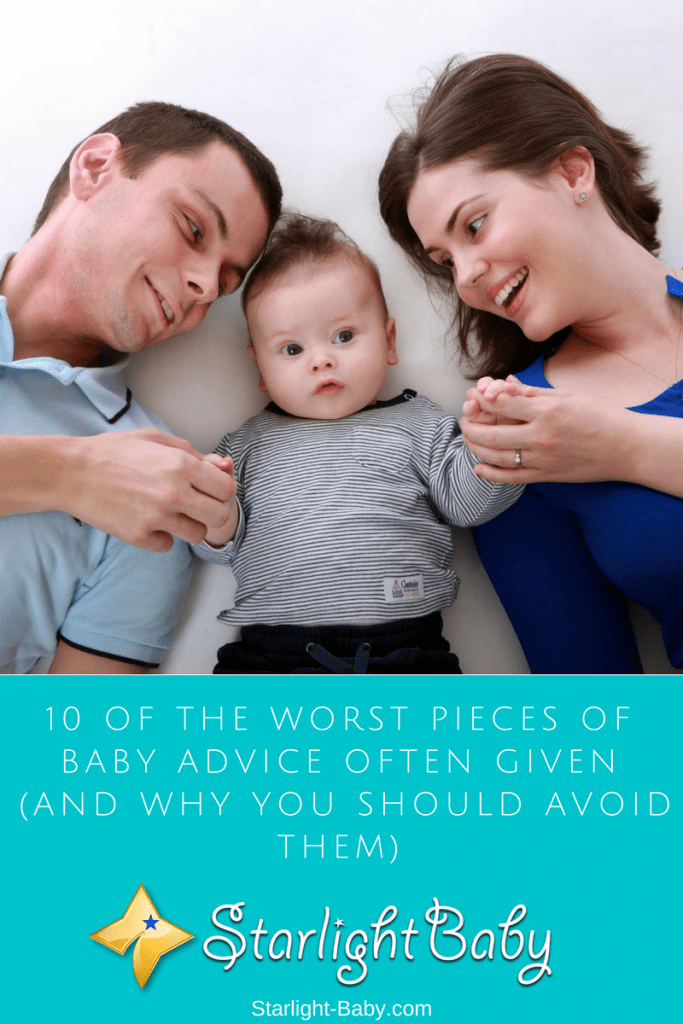 The moment you become pregnant, you’ll find the entire world seems to have an opinion or some piece of wisdom you absolutely need to follow. Even popping to the grocery store, you’ll find complete strangers feel the need to pass on their years of advice. While their heart is in the right place, unfortunately this sudden invasion of unwanted advice can start to drive you insane.

It’s not just a simple annoyance however. Some pieces of advice offered to new parents isn’t just ineffective, it’s potentially dangerous too (no wonder it seems so crazy!) Here, we’ll look at 10 of the worst pieces of advice parents are often given and why you should avoid following them.

This nugget of wisdom is often passed down by the older generation. They’ll insist smacking baby’s gums with a spoon will help you to discover whether or not they are teething. The theory is, if the gums click, there’s a tooth hidden behind them – a sure sign your little one is therefore teething.

Top signs to look out for include constant drooling, raw-looking gums and constant irritability. You’ll also be able to feel the gums using your finger, to see whether any teeth are hiding behind. So, no spoon or hitting of the gums needed!

See: How To Spot The Signs Of Teething

While we’re on the subject of bad teething advice, a very common piece of advice is to rub alcohol on baby’s gums to soothe them. This is absolutely false and alcohol should never be used to try and soothe baby’s sore gums.

2. Avoid Diaper Rash By Simply Throwing Those Diapers Away

Diaper rash can be common in infants, so it’s understandable there’s a lot of advice given on how to eliminate it. However, one piece of advice you’ll want to avoid is to throw the diapers away and let baby let it all hang out.

Now, obviously if they aren’t wearing diapers, they’re unlikely to get diaper rash. However, you’re also going to spend the majority of your time cleaning up a lot of unpleasant disasters. With nowhere for waste to go, you’ll end up doing a lot more washing, and getting significantly dirty.

There are a lot of remedies available to help with diaper rash, so don’t be tempted to try the natural test!

3. You Need To Be Stricter With Baby As They Are Manipulating You

Another common piece of advice you’ll want to avoid is to be stricter with your little one because they’re actually manipulating you. As an adult, it’s easier and natural to look at situations from an adult perspective. There’s a lot of advice floating around about how important it is to create a routine for baby and stick to it. However, this usually refers to older babies.

Until babies reach a certain age, they are unable to understand a routine. They’re also incapable of being manipulative. So, leaving them to “cry it out” or giving them tough love before the age of 2-4 months isn’t going to have the effect you think it will.

Don’t feel bad if you’ve actually done this however. It is a very common misconception that babies can be manipulative and you need to stick to your guns right from day one. You’re definitely not alone if you’ve tried the tough love approach.

The recommendation to not use a car seat is one of the most dangerous pieces of parenting advice you’ll come across. Many people swear it couldn’t be safer to carry your little one on your lap rather than a car seat. However, not only is it potentially very dangerous to carry baby on your lap while you travel, it’s also against the law – and rightfully so.

The laws regarding infant car seats are there for a reason. It’s also really important to ensure you’re using a proper fitted car seat and that baby is strapped in really well before you set off.

People who recommend not using a car seat are generally those who grew up in a different era where car seats weren’t overly popular or legally required. The truth is, placing baby into a car seat could literally mean the difference between life or death if you were to be involved in an accident.

5. Avoid Using The Word “No” To Your Child

There’s been a huge increase in the number of parents opting for “positive parenting” techniques. While many of the methods used during positive parenting can be extremely effective, some are a little more questionable. One in particular is the avoidance of the word “no”.

It’s said that if you use the word “no” a lot to your little one, they’ll start to repeat it over and over again once they reach the toddler stage. This can understandably be quite annoying, so it’s understandable it may seem better to avoid using it completely.

That is of course, until your little one starts to do something potentially dangerous. Say for example, they’re about to stick their tiny fingers into an electrical socket. Are you going to have the calm reserve to say “Hang on baby, you really don’t want to do that”? No. Sometimes, the word “no” is absolutely needed and it’s worth the potential annoyance you may experience once your baby reaches the toddler stage.

When your little one is older, you can start to have more conversations about why things are right and wrong, but until they have a good grasp of the English language, “no” is an effective way to ensure that they learn what is and isn’t acceptable.

6. Don’t Swaddle – It Can Be Harmful To Your Baby

There seems to be a common misconception that swaddling can be harmful to your little one. The most bizarre reason you’ll be given to avoid swaddling baby is that it can lead to deformities of the arms and legs.

Now, like most of the bad advice listed here, there is some logic behind it. As swaddling does involve wrapping baby up tightly so they can barely move, it’s safe to assume it could cause issues with circulation and cause the limbs to grow abnormally. However, unless you’re planning on leaving baby swaddled tightly for the majority of the day, it’s actually very unlikely it’s going to cause any issues and it certainly won’t lead to any deformities.

In fact, swaddling can be one of the best things you do for your baby. It really helps to comfort them and combat the natural falling sensation babies develop. However, it is important that you learn how to do it correctly in order to avoid any potential problems.

7. You Need To Relax More

While it may be a very good observation, being told you need to relax more can have the total opposite effect. It’s also impossible to fully relax when you have a baby to look after. The worst, is when you’re compared to other moms who appear to be much more relaxed than you.

Don’t let these comparisons get you down. Yes, Deborah may be much more put together because maybe she has a little more help? Or maybe she’s just very good at hiding the pent-up fear and stress that naturally comes with parenthood? There’s also the fact each child is different and Deborah may be lucky enough to have a baby who sleeps all the way through the night – yes these rare babies do exist!

So, the next time somebody tells you to relax more, don’t worry if you can’t do it. Practically every new parent spends the majority of their time one step behind a complete nervous breakdown!

8. Don’t Cuddle Your Baby So Much – You’ll End Up Spoiling Them

Ok, so this is another nugget of wisdom that’s often passed along. Very similar to the “baby is manipulating you” advice, it’s impossible to spoil a baby with cuddles. In fact, it’s absolutely recommended you give your little one as many cuddle as you want.

Bonding with baby is essential in the early days and one of the most effective ways to do this is through via skin-to-skin contact. It’s how they know they are loved. So, if you hold back on the cuddles, you could find you don’t bond with your baby as much and this in turn will lead to a whole range of even worse issues later down the line.

9. When Baby Wakes Up At Night, Give Them Water Not Milk

Many parents have been told by well-meaning strangers, that if their little one wakes up in the night, only give them water. The reason? Babies don’t like water, so if that’s all they are given during the night, they’ll eventually stop waking up for a feed.

You can’t fault the logic with this one, but the truth is, giving water to a baby under the age of six months old is not a good idea. Experts always say to avoid feeding water, or anything other than milk or formula to babies under the age of six months old. There’s also the fact it doesn’t quite work the way it’s supposed to. Your baby will still be hungry and they’re also unable to link to the fact that they’re only getting water and not milk.

Remember – babies can’t think like adults and they’re purely driven by their instincts.

Another bizarre, and bordering on cruel, piece of parenting advice you may have come across is that if your baby bites you, you should bite your baby back.

Babies and toddlers do go through a phase of biting. Babies largely do it when they’re teething as they get a feel for their new abilities. It’s completely natural, rather than a bad habit. Even with toddlers who know biting is wrong, you should never resort to biting them back.

It may sound obvious, but when you’re told to give something a try and nothing else has worked, it can be tempting to give these bad pieces of parenting advice a try. If you have followed some of them, don’t feel bad about it. It’s difficult to establish which pieces of advice you should and shouldn’t be following.

Almost all of us have been given some terrible advice at one point or another, and we want to hear yours. Share the worst piece of parenting advice anyone’s ever given you in the comments below – it could really help someone out!