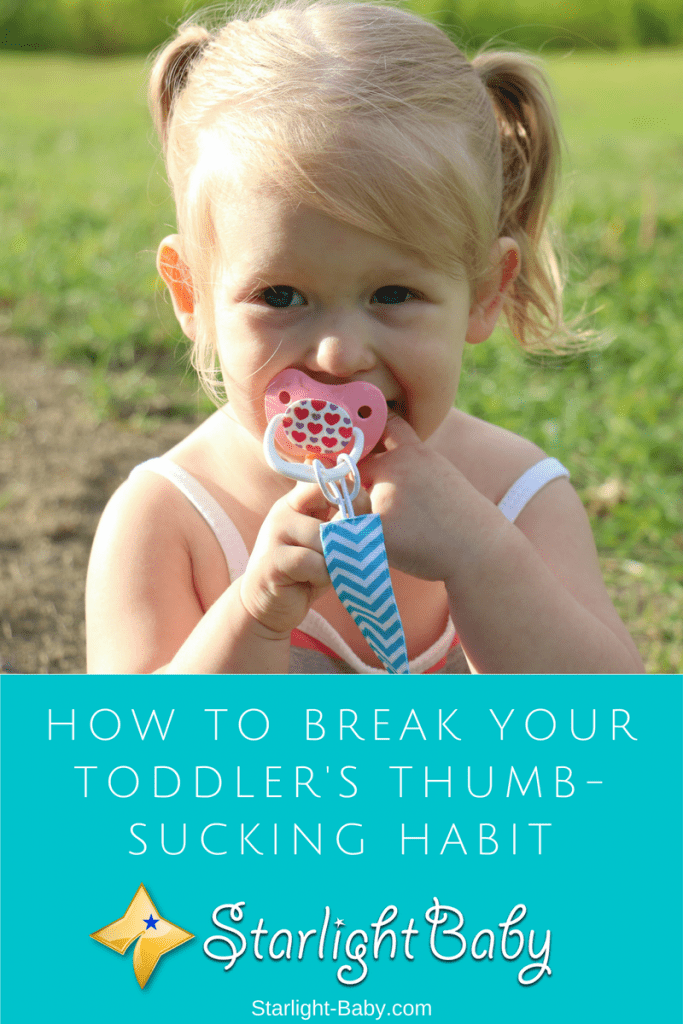 Toddlers are known for their frustrating and often embarrassing habits. One habit in particular many parents struggle with, is thumb sucking. Whether your little one has naturally developed the habit, or whether they started using their thumb as a substitute for a pacifier, it can be really difficult to get them to stop.

The main concern parents have is that their little one’s habit will cause problems with their teeth. It can also potentially lead to issues with speech development, though this is pretty rare. So why do toddlers suck their thumbs and how can you stop it?

Why Toddlers Love To Suck Their Thumb

The number one reason toddlers start to suck their thumb is because it’s comforting. What you might not know is that the habit actually develops in the womb. Many times, ultrasounds have captured babies sucking their thumb, much to their expectant parents delight! So, it’s a natural reaction that your toddler has been doing before they were even born.

You may even notice they begin to suck their thumb at bedtime. It can really help them to drift off and get back to sleep if they wake up in the middle of the night. It is more of a stress relieving reaction and for many parents it’s a godsend as it helps to avoid many toddler tantrums.

We all have ways to help us deal with stress and for your toddler it’s sucking their thumb!

Is It Something To Be Worried About?

The majority of children stop sucking their thumb naturally by the age of five. However, there are some children who need a little encouragement to stop.

Long-term thumb sucking can lead to problems with teeth and speech development. The motion of thumb-sucking can put a lot of pressure onto the upper jaw, causing it to become narrower. This causes the teeth at the top to stick out a little and they won’t meet the bottom teeth when the mouth is closed. Braces are usually used to correct this problem when the child gets a little older.

Initially it was thought that these problems wouldn’t be an issue until the permanent teeth had grown. However, there are some experts who now warn that thumb-sucking could become an issue as early as age 2-4.

So, while it is normal for children to still suck their thumb at the age of 4-5, it can be a good idea to break the habit as early as possible.

How To Stop Your Toddler Sucking Their Thumb

There are a lot of tips online you’ll come across claiming to help stop thumb-sucking in its tracks. However, not all of them are effective. The best ways to eliminate the problem include:

Don’t Force The Issue – Trying to stop thumb-sucking overnight is not only completely unrealistic, but it’s also going to cause a lot of frustration, crying and temper tantrums that could be avoided. Resist the urge to literally pull your toddlers finger from their mouth. Keep in mind that they are doing it as a coping mechanism and it’s something they’re going to grow out of. After all, you don’t see many high school kids walking into school sucking their thumb!

However, while you may not be able to stop the behavior immediately, there are ways you can speed it up.

Create Acceptable Thumb-Sucking Times – A good tip is to reduce the amount of time your toddler spends sucking their thumb by introducing specific thumb-sucking times. For example, allow them to suck their thumb only at certain times such as bedtime and only in the house.

Explain to your little one that thumb sucking is something that’s only appropriate for indoors and at certain times of the day. It may take time, but gradually reducing the habit rather than stopping it abruptly will be much more effective.

Avoid Trying Recommended Remedies – If you search for tips online, you’ll come across many “guaranteed remedies” which claim to stop children sucking their thumb immediately. These include dipping the thumb in bitter tasting ingredients such as vinegar, and topical treatments you can pick up at your local pharmacy.

Be Supportive – Rather than telling your toddler that they need to stop sucking their thumb, let them know you’ll be there when they are ready to stop. Offering help rather than demanding they stop, will be much more effective. Toddlers tend to be quite rebellious too so if they are told not to do something, it’s only going to make them more likely to do it.

Master The Art Of Distraction – Re-directing the behavior is another great tip. Start watching your toddler to identify the times they are most likely to suck their thumb. It could be while they watch television for example. Once you’ve learnt their thumb-sucking triggers, you can then work on distracting them with another activity. Giving them something to play with or a teddy to cuddle up to for example, will often distract them long enough to forget about sucking their thumb.

Be Understanding During Stressful Times – If your toddler is going through a lot of change right now, factor that in and be aware they will more than likely suck their thumb more during these times. It could be you’re moving house or they may be meeting a lot of new people. As already established, thumb-sucking is a coping mechanism and during stressful times it would be cruel to force them to stop and create even more stress.

Praise Them When They Aren’t Sucking Their Thumb – It’s common to only tell your child when they are doing something wrong. However, praise is a far more effective tool at stopping certain behaviors. So, instead of disciplining your toddler when you see them sucking their thumb, praise them when they don’t. It’s surprising how effective this can be as children seek approval from their parents and work hard to please them.

Overall, it’s understandable to worry about thumb-sucking as it can lead to problems with your little one’s teeth. However, you usually don’t have to worry until your child reaches the age of 4-5, unless they suck their thumb vigorously. If you are concerned, visit the dentist and see what they suggest. Each child is different so you may find you need to try a few of the tips above before you find one that works for you.