Honey: Why Is It So Bad For Babies? 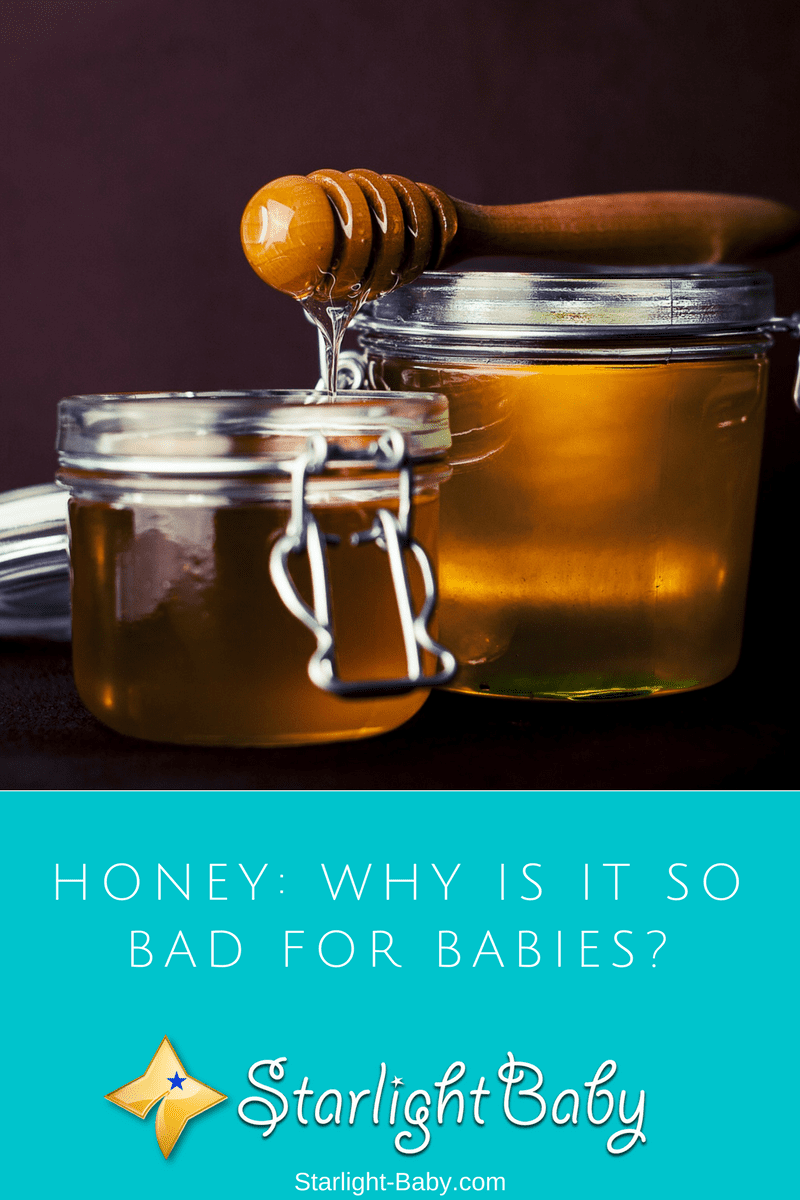 When it comes to introducing a solid diet to your little one, there’s certain foods you’re told to stay clear of. This is because, young babies have a lower immune system, as well as a more sensitive digestive system. There’s a number of foods which should be avoided, but honey is by far one of the most potentially harmful foods you can feed your infant.

So, why is honey bad for baby and what harm could it really do?

What Harm Can Honey Do To Babies?

Many parents feed their baby honey and report no ill side effects. So, why does the World Health Organization and The American Academy of Pediatrics strongly advise against it?

Well, the trouble is, honey can contain Clostridium Botulinum spores. This can lead to a very serious condition known as botulism. It’s a very rare condition, with an estimated 145 cases being reported each year in America. So, if it’s so rare, why are there so many warnings about feeding honey to babies? It’s because out of those 145 cases, approximately 94 of them are infants. Going deeper into the findings, 90% of babies diagnosed with infant botulism are less than six months old.

Doctors fear the actual number of annual cases of botulism could be as high as 250, with many patients left undiagnosed.

Infant botulism isn’t just caused by honey, it can also be caused by soil. If baby is in the backyard for example, and they eat a handful of soil, they could end up ingesting Clostridium Botulinum spores. However, in the majority of cases the condition is brought on by honey.

When adults swallow these spores, they almost never experience any negative side effects. However, a baby’s gastrointestinal tract isn’t yet fully developed. So, when the spores enter the body, they germinate and start to produce a botulinum toxin.

What’s scary about this is botulinum toxin is currently considered the most poisonous natural substance for humans. Only a little, 0.0000001mg for each kg of a person’s body weight to be exact, is required to be lethal. If that amount of the toxin enters the blood stream, it can kill a person in minutes. It does this by paralyzing the muscles used for breathing.

This toxin is so dangerous that researchers can not even publicize the gene sequence of the toxin because it poses a security risk.

Out of all infant botulism cases reported worldwide, the majority are in America. Some states are more prone to the condition too including Utah, Pennsylvania and California. It’s also thought that in 10% of SIDS cases, it could actually be infant botulism which caused the fatality.

What Are The Symptoms To Watch Out For?

The trouble with infant botulism, is that although it can be fatal, in most cases babies are only mildly affected. This means it can go undiagnosed in the early stages. Constipation is typically the first symptom to appear. It can develop anywhere from 3 to 30 days after baby has ingested the Clostridium Botulinum spores.

A loss of appetite and weaker cry are the next symptoms to develop. Often, this is as severe as the condition gets before it is diagnosed. However, it can progress pretty quickly to a loss of head control, an impaired gag reflex and there may be drool coming from baby’s mouth.

It’s really important to get your baby checked out by a doctor if you notice any of these symptoms. However, if the symptoms appear to relate to the latter stages of the condition such as a weaker cry and loss of head control, they should be taken directly to the emergency room, rather than the doctor.

Can It Be Treated?

Infant botulism can thankfully be treated, but early diagnosis is vital. If your little one is diagnosed with the condition, they’ll usually need to be placed into an Intensive Care Unit for around a month. Here, they will be fed through a tube and be exposed to mechanical ventilation.

After being in intensive care, they will also then need to be kept in a hospital ward for up to two weeks. If it has been caught and treated early enough, the majority of babies will go on to make a full recovery. The number of babies who die from the condition is less than 1%.

The average cost of treatment is just over $100,000. This is unfortunate, as it poses an additional worry on top of the fear of losing your baby.

Infant botulism is rare, but the dangers presented from honey are still very real. The question you need to ask yourself is whether you’re happy to risk giving your baby the condition just to allow them a little honey?

Typically, honey is safe after 12 months of age. So, eliminating honey from the diet for just 12 months seems like a very small sacrifice when you consider the potential dangers. It’s also worth noting that it isn’t just raw honey you need to be careful of. Any products containing honey can also contain the spores. Even a little honey placed onto baby’s pacifier can be highly dangerous.

Overall, honey can have many health benefits, but for babies under the age of 12 months, it presents far more risks than benefits. It’s definitely worth heeding the advice of the World Health Organization and The American Academy of Pediatrics and avoiding honey until baby is old enough to fully digest it.