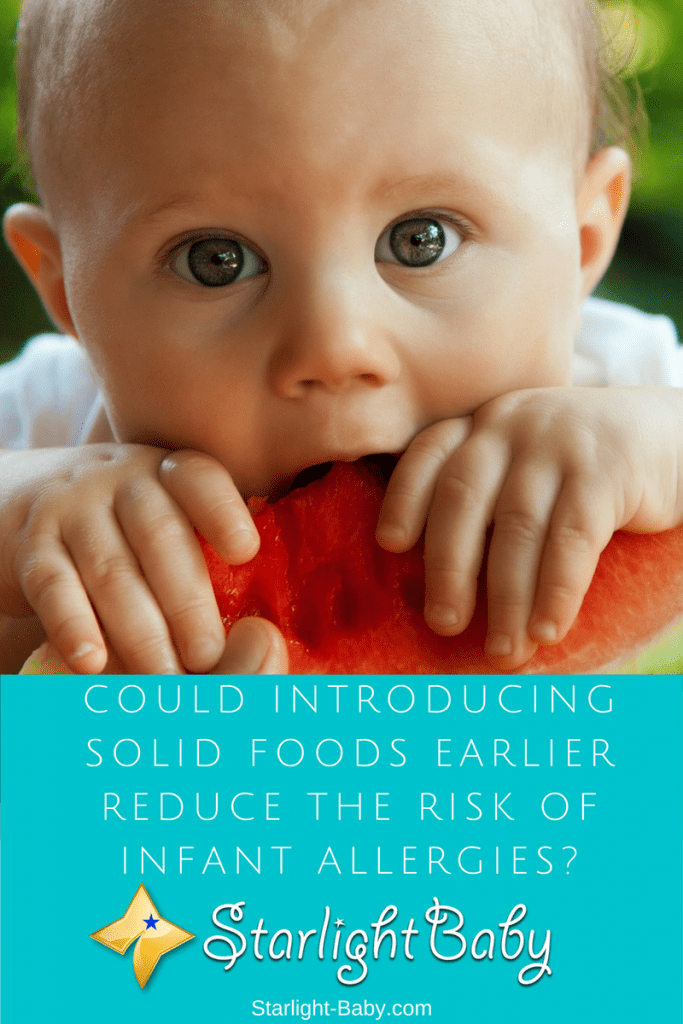 Infant allergies are common, particularly in the Western world. While more frequent in babies who are bottle fed, allergies still affect two to three out of every 100 babies who are breastfed. They can be a nightmare to deal with and aren’t very pleasant for your little one either!

However, hope has been provided to parents thanks to the Australian Society of Clinical Immunologists and Allergists (ASCIA). The new ASCIA guidelines of 2016 claim that introducing solid foods into a baby’s diet earlier could reduce the risk of infant allergies.

How Early Can Solid Foods Be Introduced?

You can of course, start to introduce solids gradually while still largely breastfeeding. So what age is now recommended to start infants on solids? According to ASCIA, it’s a good idea to start adding solids from 4 months of age.

In particular, allergenic foods should be introduced such as milk, eggs, nuts and fish. The theory behind this is that the later you wait to introduce these foods into your baby’s diet, the more chance there is their immune system will recognise them as a foreign substance later on. So, logically the earlier you introduce such foods, the less likely your baby will be to develop an allergy.

Of course, this isn’t always the case and allergies cannot always be prevented. Therefore, it’s highly recommended you follow the advice given to you by a health practitioner. It’s also worth remembering that solids which are introduced at age 4 months should always be blended or pureed into a smooth consistency to prevent choking.

How To Tell If Your Baby Is Ready For Solids

Just because these new guidelines suggest starting your little one on solids at 4 months old, it doesn’t mean that’s what you should definitely do. All babies are different and it’s vital you pay attention to when your little one is ready to move onto solids.

There are a few development features you need to look out for before attempting to feed your baby solids. These include:

They should be able to hold their head up without help – If you still need to support their head upright, it’s not a good idea to attempt to feed solid food.

They can make a chewing motion – Even pureed food requires some amount of chewing. Very young babies are unable to push the food back into their mouths and then swallow voluntarily. So you do need to wait until your little one can do this before they can move on to solid food.

Dribbling is reduced – At the same time your baby can make a chewing motion, dribbling tends to reduce a lot. So, if your little one starts to dribble less, that’s a good indicator that they are ready.

These are the main development features to look out for. There’s also a few other signals they’re ready for solids such as showing more of an interest in what you’re eating. They will also have pretty good co-ordination such as being able to look at the food, pick it up and then direct it towards the mouth. Finally, they may also start to chew on their fists or start wanting to be fed more milk.

Which Feeds Shouldn’t You Feed Your Baby?

So do the new guidelines mean you can feed your baby any solid foods? Unfortunately not! There are still foods you should avoid such as raw eggs. Salt, sugar and honey should also be treated with caution.

Your baby should never eat too many salty foods, as it can have a seriously negative impact on their kidneys. So if you’re planning on giving them the same foods the rest of the family is eating, be sure they don’t have gravy or stock cubes for example, as these are notoriously high in salt.

Similarly, too much sugar is also bad for babies. They actually don’t need any sugar in their diet. If they are exposed to a high-sugar diet, it can cause problems with their teeth. Avoiding high sugar snacks and fruit juices will ensure you don’t overload them with unnecessary sugar levels. Instead, sweeten food with fruits such as bananas.

Honey is one of the few foods parents are urged to avoid until 12 months of age. This is because it can contain specific bacteria which creates toxins within a baby’s intestines. This in turn can lead to what is known as infant botulism, a serious illness. Of course, honey also contains sugar so it’s bad for baby’s teeth too.

Overall the introduction of solid foods from 4 months of age can help to reduce the risk of food allergies. However, as with anything it is better to consult a doctor before introducing anything new into your child’s diet.