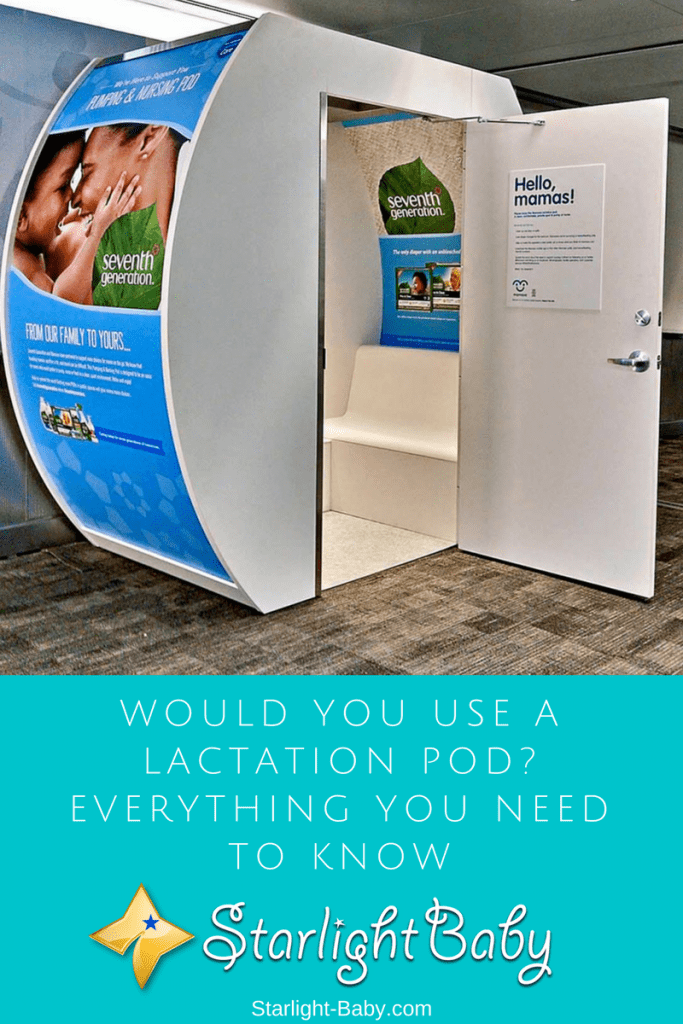 Breastfeeding might be one of the most natural things in the world, but when it comes to doing it in public, it can be an uncomfortable process.

Despite increased awareness being raised in recent years, there’s still sadly a huge taboo surrounding this natural activity. In some places, mothers are even being stopped and told to use the restroom if they attempt to feed their little one in public.

Of course, some mothers feel uncomfortable breastfeeding in public anyway, so they’re forced to use the restroom if they’re out and about with their baby.

Whatever your views and preferences are about feeding your baby in public, one company might have come up with a solution – the lactation pod.

What Is A Lactation Pod?

The Lactation Pod is an innovative product designed by Mamava; a company set up by two frustrated mothers.

Managing director, Christine Dodson and her colleague, Sascha Mayer, a brand strategist, set up Mamava to solve a problem all breastfeeding mothers have – a lack of private, suitable facilities.

Together with David Jacks, a designer, they created the Lactation Pod, or Lactation Suites as they are also commonly known. These are basically mobile rooms which provide lactating mothers with the facilities they need to feed their little one in private.

However, they’re so much more than a private room. The creators have also taken into account the psychology behind breastfeeding and the factors that would make the experience as comfortable and easy as possible. They didn’t want it to just feel like a private bathroom. Instead, they’ve added:

The minute you step into one of these pods, you’re surrounded by peace, quiet and serenity. There’s room enough to fit a stroller, two or three children and all of your breastfeeding equipment.

The pods themselves were largely developed with pumping in mind. That’s why they are fitted with electrical outlets and a large fold-down table to accommodate your pumping equipment. This is something that is severely lacking in public bathrooms. However, the creators of these pods also stress that they are perfect for natural breastfeeding too.

It’s the smaller details that make these pods really stand out. The wipeable seats and surfaces are great for potential spills, while a lockable door ensures maximum privacy. You even need to enter a little code to get into the door, preventing children from being able to open and close it themselves.

Where Can You Find Lactation Pods?

At the moment, lactation pods are available in very limited places. They haven’t long hit the market and the cost has limited who can actually afford them. It is worth pointing out these aren’t something you can buy for the home. Well, technically you can, if you have a spare $11,000! However, they are largely marketed at businesses and public spaces such as malls, airports and zoos.

The goal of the lactation pods was to fill the gap, especially for working mothers, who currently have very limited options of where to feed their little one when they’re out and about.

Even at work, businesses don’t tend to have dedicated areas their female employees can go to breastfeed. However, the laws are changing and businesses which employ more at least 50 non-exempt employees, are required to provide adequate space as well as time for mothers to breastfeed their babies. It’s also highlighted here that the space isn’t able to be a bathroom. So, these lactation pods are likely to appeal to larger businesses who have very limited internal space to add additional room for breastfeeding facilities.

So, they may not be available in many places just yet, but that is likely to change in the not too distant future. For now, you can discover where your nearest lactation pod is using the Mamava app. It’s totally free and is available on both Android as well as iPhone devices.

Not Everyone Is A Fan Of These New Lactation Pods

While many women are excited by the development of these cozy, private lactation pods, some are less than impressed! In fact, many mothers find them offensive, as they’re still seen as dictating where a woman should go to feed her child.

The main issue appears to be how the lactation pods are advertised. A mother of three was particularly annoyed by how the Atlanta Airport had advertised its new lactation pod locations. Her issue was that under the law of the Georgia Code, it states that the breastfeeding of a baby is natural act, and the mother should be able to feed her baby in any location she chooses.

However, while it’s true women should have the choice to breastfeed wherever they want, these lactation pods aren’t actually designed to dictate where you should go. As mentioned earlier, they are especially designed for breast pumping. This is something that’s actually pretty difficult to do just anywhere. Many pumps need an electrical outlet, then there’s the space it takes up. So, the pods are designed to make it easier for mothers who pump, as well as giving women the option to go somewhere private if they prefer.

Overall, the lactation pods are an exciting development, but whether you choose to use them or not is entirely up to you. They aren’t found in many places right now, but it’s more than likely they are going to gain in popularity over the course of the next year so availability will increase.

What do you make of these lactation pods, would you use one? Share your thoughts below!