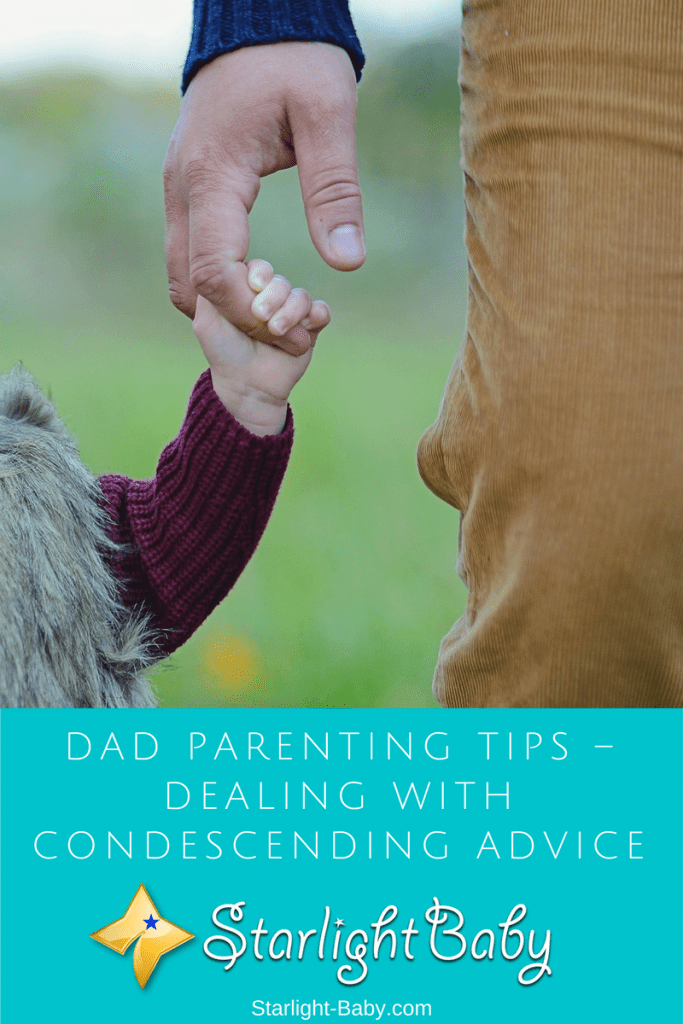 Have you ever noticed a lot of the advice given to new dads tends to be very condescending? I was surprised by just how many parenting sites appear to talk down to men; treating them as though they are dumb and incapable of even the most basic of parenting tasks.

Mothers are often automatically seen as the baby experts in their family, regardless of whether it’s their first child or not. Fathers however are treated like children, often mocked for their inexperience. In this day and age it’s disappointing the attitude towards fathers hasn’t changed and it’s unsurprising many dads become extremely frustrated with the constant condescending advice they’re given on a daily basis.

If you’re tired of being talked down to and you’re ready to explode, here you’ll discover the best ways to deal with condescending advice.

Your partner is the number one person who can help you in this situation. She’s your ally and can help minimize the criticism from other people such as your in-laws or even strangers. Or maybe it’s your partner who is treating you in a condescending way? Whether she’s the issue or not, the way to get her on your side is to talk to her about it.

Now this isn’t easy for some men to do. It’s also natural to go into the conversation in a defensive and dominant manner. However, this isn’t going to help you. It’s important to remain calm, no matter how frustrated and angry you are. You’ll often find once she knows how you feel, she’ll start supporting you and standing up for you when other people do make unnecessary sexist comments.

Communication is the key to any relationship and often just opening up about how certain things make you feel is enough to spark a change.

Don’t Be Afraid To Stick Up For Yourself

Talking to your partner can help to some degree, but it isn’t going to help when you’re out with your little one alone. Strangers often have a habit of stepping in to offer advice and opinions on how you should be raising your child. They may even mean well, but a lot of the time it can come across very condescending.

You’ll get told you’re doing things wrong, or if your little one is having a tantrum you’ll often hear remarks such as “Aww are you missing your mommy?”. It’s infuriating, especially after what seems like the hundredth time it’s been said so far that day. So how do you handle this type of sexism?

Firstly, forget what other people think. It’s hard to do, but you need to put it into perspective and realize what strangers think doesn’t really matter. So, if you can, smile and thank them for their advice/opinion and say you’ll take it on board. Of course you won’t, unless it’s genuinely helpful, but it’s a polite way to dismiss the comment. Or, don’t be afraid to defend yourself. Without causing a scene, correct them if they’ve made an unfair assumption on your parenting skills. Tell them off if they’ve stepped out of line. You’re not going to have to see them again so who cares what they think?

Never be afraid to stand up for yourself and show you’re not just a dumb dad with no clue what he’s doing. You’re an equal parent and you deserve to be treated like one.

Fatherhood is a challenge and it’s hard enough without having to deal with the condescending advice and remarks from others. The above advice is the best way to deal with unwanted sexist comments.

The key is to believe in yourself and know you’re a great dad. Enjoy this time with your child as it goes by so quickly. It’s easy to get bogged down by other people’s opinions, so just focus on your little one, be as good of a dad as you can be and accept the sexist views of fatherhood are there, but they don’t have to define you or the way you parent your child.

Have you experienced condescending advice while out and about with your child? How did you handle it? Share your experiences below…