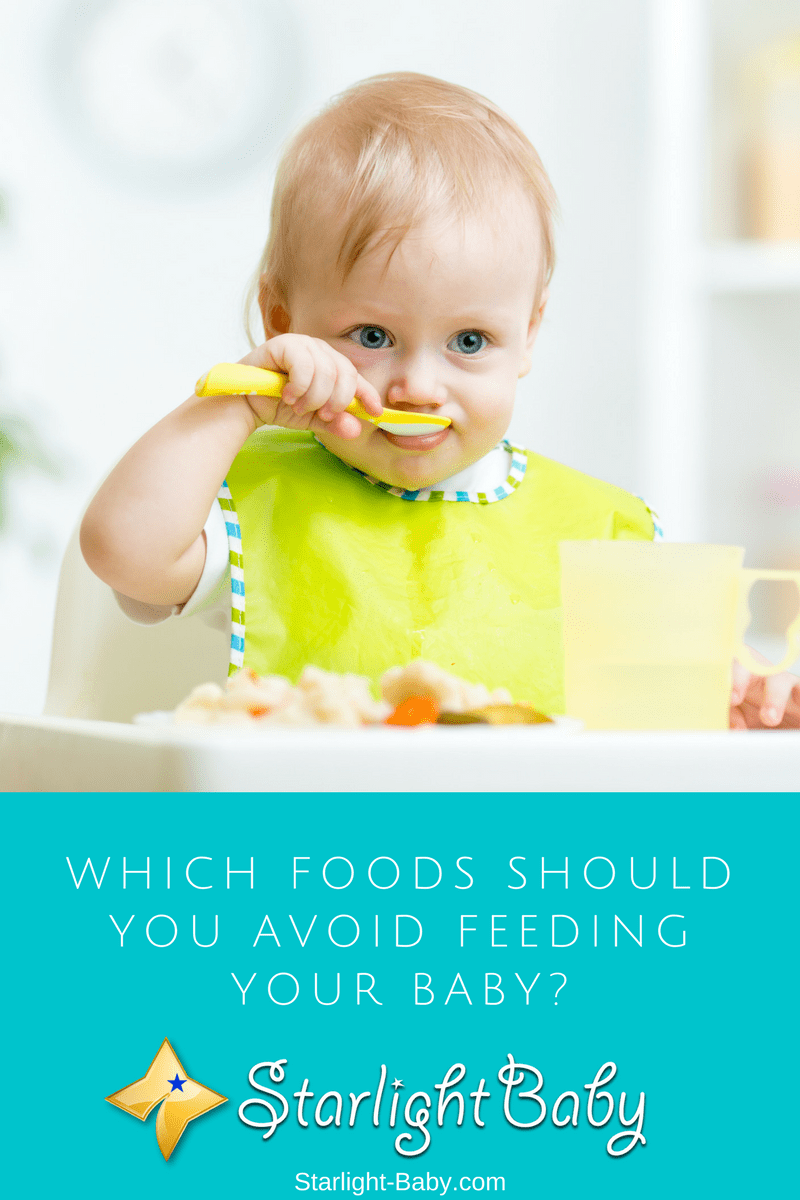 Weaning your little one onto solid foods can be exciting, but also pretty daunting too. You’ll obviously want to start feeding baby a range of delicious new foods, including the things on your own plate. However, before you introduce anything new, it’s important to ensure it’s safe.

There’s surprisingly a lot of foods you need to be careful of and it gets even more confusing when you add the monthly age restriction recommendations. Some foods are perfectly fine for older babies, yet not suitable for younger babies. So, it’s important to do your research to see which foods should be avoided.

Here, we’ll look at the main foods you’ll want to avoid feeding your baby during their first year.

While some of the foods on this list are simply advised against for potential allergic reactions or choking hazards, honey is the one food which can have severe consequences for baby. It’s advised babies under the age of 12 months old shouldn’t be given honey in any form. This is because, although it is rare, honey can lead to a condition known as Infant Botulism – a potentially fatal condition.

Of course, honey is also considered a type of sugar, which means it can also be really bad for baby’s teeth too. So, it’s best to completely avoid honey until your baby is at least one-year old. You can find out more about the dangers of honey and Infant Botulism here.

As adults, we’re well aware of the benefits of raw vegetables. However, you’ll want to avoid feeding them to baby. The main reason for this is because they’re far too hard for your little one to eat until they’re a little older.

Feeding baby raw vegetables poses a choking hazard and could be bad for their teeth too. As they won’t be able to properly chew the vegetables, it could put too much pressure onto the teeth.

Now, this isn’t to say you can’t feed your baby vegetables at all. You’ll just need to make sure you puree or steam them first. It’s also important to cut the veggies up into smaller pieces to avoid the risk of choking.

Experts typically advise waiting until baby turns one before introducing cow’s milk. This is because babies aren’t able to properly digest cow’s milk until they’re a little older. There are instances where moms need to feed their babies cow’s milk rather than breast or formula milk, but this should only be seen as an option if it’s been recommended by a doctor.

So, why should it be avoided? Well, besides the fact it’s hard for baby to digest, it also contains a lot of added minerals and protein which could actually be harmful to baby’s kidneys.

Now, grapes can be a healthy, nutritious addition to baby’s diet, but only if it’s cut properly. Whole grapes are one of the biggest choking hazards for babies, but did you know they can also be a potential hazard if they’re cut the wrong way?

Ideally, you’ll want to wait until baby is at least six months before feeding grapes and you’ll want to make sure they’re cut up into really tiny pieces too.

Seeds and nuts pose another potentially serious choking hazard. However, unlike most foods on the list, these shouldn’t be fed whole to children until they are at least four years old.

As well as being a potential choking hazard, nuts can also bring on allergies. So, if you have a family history of nut allergies, you should definitely avoid feeding them to baby. This extends to peanut butter too. Although babies love peanut butter, its stickiness can also be a choking hazard and it’s also pretty bad for the teeth.

Once baby reaches six month old, you can introduce nuts as long as you grind them up really well beforehand.

It’s important to start off by saying not all fish is bad for baby. In fact, it can be a healthy food to introduce once baby turns six months of age. However, there are certain types of fish which should be avoided.

The fish you’ll want to avoid are those high in mercury. Salmon, swordfish and turbot are all examples of fish which have high levels of mercury. The reason why mercury is bad for baby is because it can interfere with the development of the nervous system and the brain.

Citrus fruits may seem like a great choice to give baby as a snack, but the acid they contain can be bad for your little one’s sensitive digestive system. They can cause stomach upset, as well as a rash. So, avoid fruits such as oranges, pineapple and tangerines.

Fruit juice is a very popular drink parents often give to their babies. However, it’s not as healthy as you might think. Many fruit juices, especially store-bought varieties, contain high levels of sugar. This includes both natural sugars and added sugar. This is obviously really bad for baby’s teeth.

If you feed citrus based juices you also get the same negative effects as citrus fruits. They’re too harsh for your baby’s sensitive digestive system. When you do start to introduce fruit juice into your little one’s diet, it’s recommended you dilute it slightly with water.

Who doesn’t love chocolate? It can seem like a great treat idea to let your baby taste a little delicious, mouth-watering chocolate but the truth is it’s actually really bad for babies. Not only does it contain sugar which we’ve already established is bad for baby’s teeth, but it also contains caffeine. This isn’t something you want your baby to eat at any time!

There’s been a lot of debate over when eggs should be introduced into a baby’s diet. The restrictions have slightly changed, with experts now claiming babies as young as six months old can safely eat a little egg. However, you might want to avoid feeding them the egg whites.

As adults, we’re often told the whites of the egg are better than the yolk. However, this isn’t the same for babies. They can develop allergies to the whites of the egg which could result in vomiting and diarrhea. So, if you want to feed them egg, stick to the yolk to begin with and avoid egg whites until baby is one year of age.

These are the top 10 foods you should avoid feeding babies until they’re at least one year of age – however, you should note that this list is not complete. However, it is advised you talk to your pediatrician or doctor before introducing any solid foods into your little one’s diet.