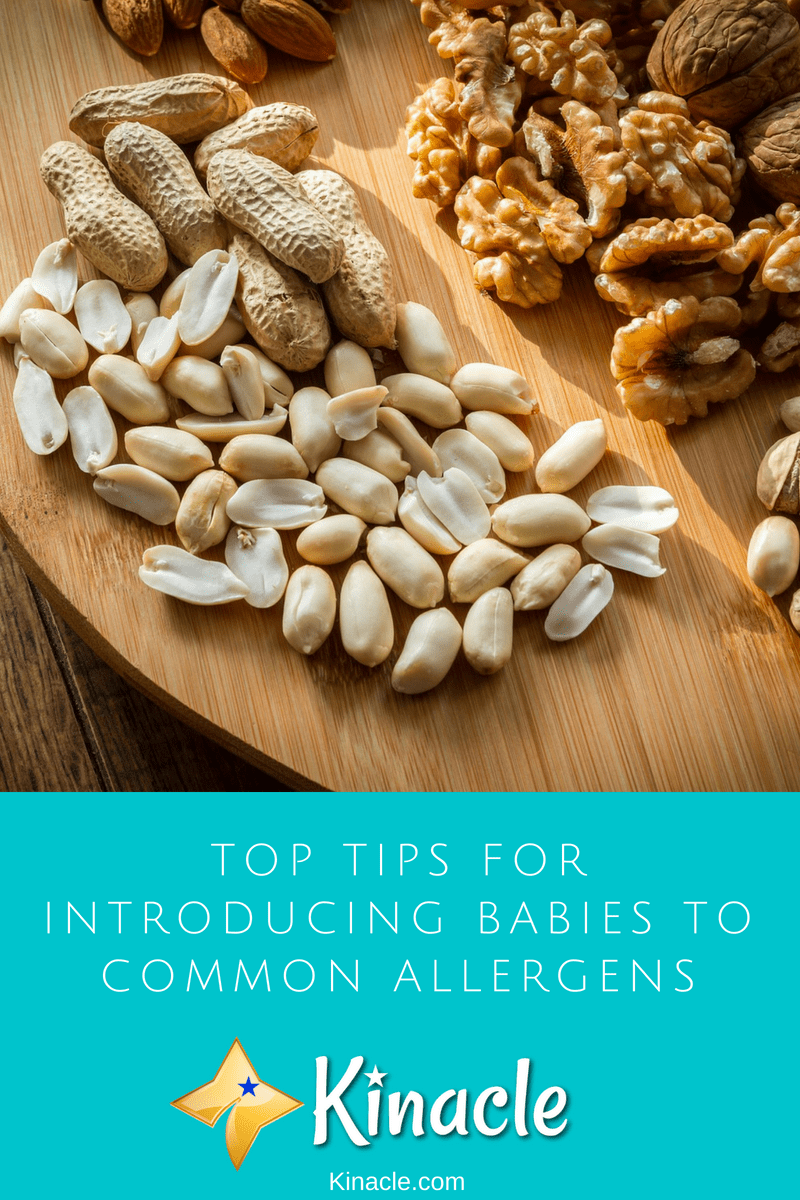 Introducing your baby to allergens is always going to be a worry. However, there are ways to ensure you’re doing it in a safe and controlled manner. Thanks to the internet, there’s a plethora of advice on how and when to introduce allergen-rich foods to your little one.

The guidelines over when to introduce allergens to babies has changed dramatically in recent years. A study carried out in 2015, known as the LEAP trial, revealed babies were more likely to have a peanut allergy if they avoided peanuts compared to babies who were introduced to them early. Even babies who were considered to be at high risk of a peanut allergy were found to have no reaction when introduced to them early on.

The results of this study changed the guidelines on when allergens should be introduced. Now, experts recommend introducing your little one to allergens within their first year. The question is, how should you do it?

Below, you’ll discover the top tips for introducing baby to allergens you’ll want to follow.

Wheat has the potential to trigger a gluten allergy in babies. However, like most other allergens, studies have shown that if introduced before 12 months of age, wheat can help to build up a gluten tolerance. If your little one has an increased risk of developing Diabetes Type 1 or Celiac Disease, introducing wheat at around six months of age is recommended.

So, how can you introduce it gradually into baby’s diet? Cooked wheat cereal tends to be the most popular and easiest way to do it. There’s a lot of brands to choose from, but Farina and Cream of Wheat tend to be better suited to babies. This is because they’re iron-fortified and feature a great texture for babies who are just starting the weaning process.

Peanuts are one of the most common food allergens in babies. However, studies have also shown that introducing them before your baby is 12 months of age, can drastically reduce the likelihood of them developing a peanut allergy.

Typically, peanut butter is the easiest food to introduce peanuts into baby’s diet. However, you might want to consider looking out for a product known as Bamba. It’s a popular puffed corn snack in Israeli, though it can also be found online if you have trouble finding it in your local store. It contains a thin coating of powdered peanut and it’s also iron fortified. This is a safer way to introduce peanuts to younger babies who may find peanut butter too sticky.

Although fish allergies are rare, they can and do occur. Therefore, it’s a good idea to start introducing a little fish into your baby’s diet when they’re weaning. Unlike wheat and peanuts, fish is a little trickier to introduce to your little one. However, a great tip is to puree the fish.

You’ll want to stick to salmon or a white mild tasting fish. First bake it in the oven, then when fully cooked, you can puree it. You may need to add a little breast or formula milk and it’s also a good idea to add the pureed fish into baby food. You can freeze any leftover puree and then defrost it as and when you need it.

Alternatively, you can try serving a little fish to baby in its pure cooked form. Once they’re around 8 months of age, you can give them cooked fish to simply eat straight from the table. Try to choose a flaky style white fish as this will be easier for baby to chew.

It’s also worth noting that you shouldn’t service your baby fish with a honey-based sauce. This could increase the risk of them developing infant Botulism. So, stick to plain cooked fish until baby is at least one year old.

The guidelines on feeding eggs to infants has changed a lot in recent years. Now, a little cooked egg is recommended for babies aged six months and over. However, you should still limit the amount you feed them.

In terms of how to introduce them into your little one’s diet, cooked egg is said to be better than baked eggs. This is because when the eggs are cooked, rather than baked, they retain more of their protein. This helps to build up baby’s tolerance of egg protein much more than they would with baked eggs. However, if you are worried, baked eggs only contain a very small amount of the protein.

It’s best to speak to your doctor or pediatrician before introducing eggs into baby’s diet. They’ll be able to give you the best advice moving forward.

As well as peanuts, other nuts can also cause an allergic reaction. So, if you’re looking to add tree nuts into baby’s diet, you’ll want to do it gradually.

One of the best ways to serve up nuts to your baby is to create pancakes using hazelnut or almond flour. This introduces them subtly to the nuts, while also creating a delicious snack or breakfast they’re sure to love.

Out of all of the allergens on the list, dairy is one of the only ones which shouldn’t be introduced until after baby has reached 12 months of age. This is of course, unless you’ve been told to because your baby has an intolerance of formula milk and breastfeeding isn’t an option.

So, if you can’t feed them cow’s milk right now, how can you introduce dairy into their diet? Yoghurts tend to be the most popular option. Ideally, you’ll want to opt for a whole-milk, plain flavored yoghurt. This is because, even though there are flavored yoghurts designed specifically for babies, they tend to come with lots of added sugar. This isn’t good for baby and they definitely don’t need it. So, plain yoghurt is the healthier choice.

If baby can handle slightly thicker style pureed food, you could also add dairy through Ricotta cheese. You can mash it together with cinnamon for a sweet touch, or with mashed sweet potatoes.

It’s worth keeping in mind that the advice above should only be used as a general guideline. Before introducing any allergens into your baby’s diet, it’s always worth speaking to your doctor or pediatrician.