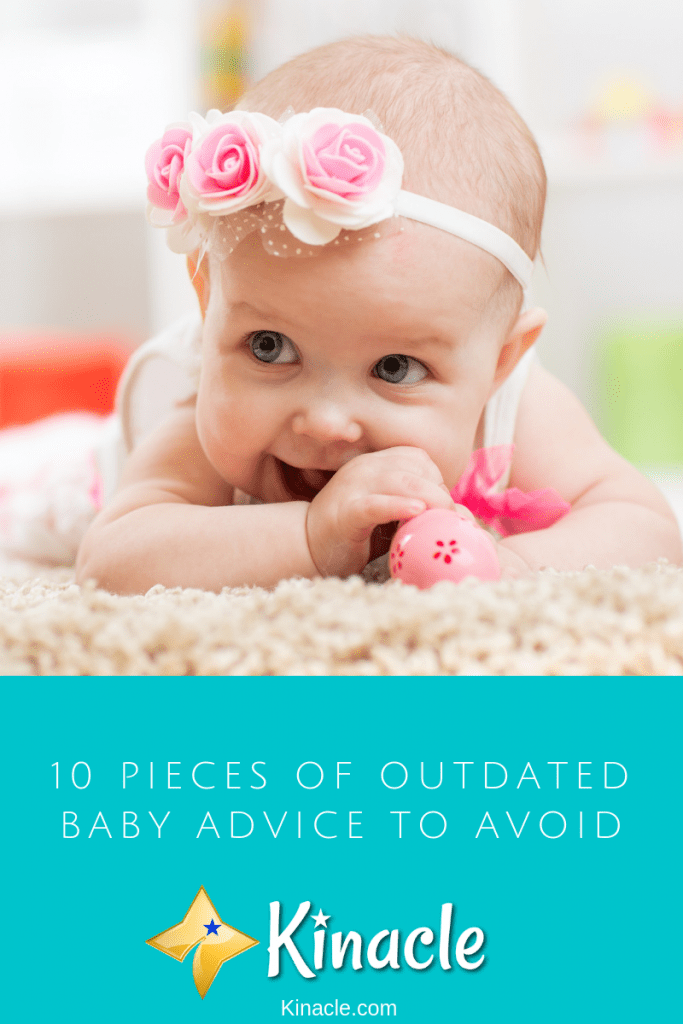 A lot of what we thought we knew about babies in the past has since been proven to be totally untrue. As time moves on, parenting advice changes. This means, the advice your parents or grandparents received is likely going to be a lot different from the advice given today.

Here, we’ll look at just 10 pieces of outdated baby advice you’ll now want to avoid. Of course, when it comes to parenting there really is no right way or wrong way to go about it. However, it is important to make sure you’re following the right advice if you’re looking at trying out new techniques.

At one time, it was believed that adding baby bumpers to the crib would protect baby from injuring themselves on the bars. They’re basically cushions which are tied to the rails of the crib, providing a soft edge in case baby moves and hits their head.

Unfortunately, this piece of advice has been proven to be dangerous for baby. It poses a real risk of suffocation, as well as the chance baby could become wedged between them. Now, experts advise against using bumpers as the risks far outweigh the benefits.

This is a long running myth which many parents still follow. There’s a fear that if you make any noise at all, baby will wake up, or struggle to get to sleep. The truth is, babies actually love a little background noise.

When they’re in the womb, it’s surprisingly noisy. In fact, some experts claim it’s as loud as a lawnmower running while baby is in the womb. Therefore, they are used to falling asleep to pretty loud noises. That’s why white noise machines are really popular today. They silence all other noises, enabling baby to feel comforted and more likely to sleep.

3. It’s Fine To Let Baby Sleep On Their Tummy

One piece of outdated advice you’ll definitely want to avoid is allowing baby to sleep on their tummy. There has been a lot of research which has shown sleeping on their stomachs increases baby’s risk of developing SIDS (Sudden Infant Death Syndrome).

It is frustrating as many babies do sleep better on their tummies. However, when you think of what could potentially happen, it’s better to avoid it and put them to sleep on their backs instead.

4. Alcohol Can Be Used To Lower Baby’s Temperature

This is a really old wives’ tale and like most of them, it’s a complete myth. In the past, when babies developed a fever, rubbing alcohol was used to bring it down. The trouble is, not only doesn’t this work, but the alcohol can actually soak through into baby’s skin. The negative effects this could have on their health isn’t worth thinking about!

5. You Can Introduce Solids Before Six Months

While all babies develop at different speeds, very few are ready for solids before six months of age. However, in the past it was recommended that solids could be started earlier. For this reason, there are still parents who are trying to introduce solids from as early as 4 months.

What this does, is that it increases their risk of developing conditions such as obesity, asthma and Diabetes. These days, breast milk and formula both have sufficient nutrients to last baby more than six months. So, don’t try to introduce solids before this time.

6. You Should Avoid Common Allergy Foods

Another piece of advice that is now considered outdated, is that you should avoid feeding baby common allergy foods. That is, foods which are known to cause food allergies in babies such as nuts.

The truth is, feeding these foods to your baby isn’t going to make them more likely to develop an allergy towards them. Instead, it’s actually been shown through research that introducing these foods early on can actually prevent your child from developing an allergy to them. Of course, if you are concerned, you should always consult your doctor or pediatrician.

7. Bouncing Baby On Your Lap Can Cause Bowlegs

One of the most bizarre pieces of outdated baby advice, is to avoid letting them bounce up and down on your knee. It was thought that doing this increases the chances your baby will develop bowlegs.

It’s easy to see the logic behind it, given the position baby’s legs are in when they can’t stand up properly. However, there’s absolutely no truth behind it. It’s also beneficial to bounce baby up and down on your lap as it helps to strengthen their development, plus it’s a lot of fun so it keeps them happy.

8. Exposing Baby To Classical Music Will Increase Their IQ

Want to ensure your baby turns into a little genius? Well, forcing them to listen to classical music isn’t going to help! It was once thought that exposing children to classical music will boost their IQ. However, no research has been able to prove that it works. Of course, that doesn’t mean your little one can’t enjoy the likes of Mozart, but it just means it’s unlikely going to boost their intelligence.

9. You Should Let Baby Cry It Out

This is another piece of outdated advice that many parents still follow today. It’s been recommended that leaving baby to cry is the best way to eliminate certain behaviors. It was believed that babies cried on purpose to get their own way. However, thanks to modern research we now know that this isn’t true.

Babies, especially newborns, don’t have the skills to know that crying generates attention. Their brains aren’t fully developed yet so when they cry, it isn’t manipulative or a bid to get their own way. Leaving them to cry it out could is believed by many to lead to eventual attachment issues. So, don’t be afraid to pick baby up and comfort them when they’re crying.

10. You Should Wake Baby Up To Change Their Diaper

Finally, a piece of advice you’ll want to avoid if you want a decent night’s sleep, is to wake baby up in the middle of the night for a diaper change. It was thought that leaving the diaper on when it’s wet could lead to nasty health effects. However, thanks to advancements in baby’s diapers, most can easily absorb high levels of urine, ensuring it doesn’t harm baby’s delicate skin overnight.

So, don’t be tempted to wake up baby just to change their diaper. You really don’t need to, plus it will only lead to a grumpy baby and ultimately a grumpy you!

So, there you have it – 10 pieces of outdated baby advice to avoid. It’s important to focus on modern parenting methods and advice as the knowledge we have today about babies and their needs, is much greater than it once was.